Bids Farewell the Contingent of the 28th Sea Games, President Jokowi Ask the Athletes for Struggling 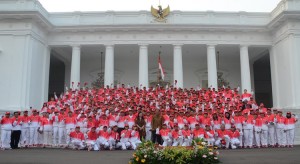 President Jokowi in the yard of Merdeka Palace in Jakarta, Tuesday (26/5) afternoon, pictured with Indonesian athletes who will compete in the 28th Sea Games, in Singapore.

President Joko Widodo (Jokowi) accompanied by Coordinating Minister for Human Development and Culture, Puan Maharani, Tuesday (25/5) afternoon in the yard of Merdeka Palace in Jakarta, bids farewell to the contingent of Indonesia who will compete in the Southeast Asian Sports Week or SEA Games to-28, which will take place in Singapore, 5 to 16 June 2015.

“First of all, I would like to congratulate and award the highest appreciation to all the athletes who have been chosen to represent the country in the SEA Games in Singapore. You are all elected to represent the nation in the international sports arena,” President Jokowi said at the beginning of his speech.

“I think you’re all well prepared, with a fighting spirit, who never gave up, because I think that is the most important basis should we have,” the Head of State said.

On that occasion, the President also had the opportunity to brief dialogue with two athletes from different sports. President asked both alternately, “What would you present to the state?”

At the end of the meeting, the President bid farewell to the Indonesian contingent by saying, “Bismilahirahmairohim, Indonesian contingent that will follow the 28th SEA Games in Singapore, I officially bid farewell. Good luck! May God Almighty always bless and facilitate our steps. Greetings sport!” the President said while encouraging the athletes.

Earlier, Minister of Youth and Sports (Affairs) Imam Nachrowi report, there are 11 countries that follow the SEA Games for the 36 sports. Indonesia will send 522 athletes for 32 sports, as well as 226 counselors and sports coaches.

“Indonesian contingent ready to compete for the red and white flag and perform the national anthem Indonesia Raya and will achieve the best performance and we intend to be in the top two,” the Minister of Youth and Sports said.