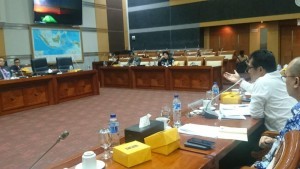 The hearing with Commission I of the DPR atmosphere in Jakarta, Monday (21/1). (Photo by: Ministry of Religious Affairs PR).

The Indonesian Government and the House of Representatives (DPR) have agreed on the obligation of biometric record as a condition for visa issuance will burden umrah (small hajj) pilgrims.

Nevertheless, the Government and the DPR have also requested the Saudi Government to delay the policy, Director of Umrah and Special Hajj Management of Ministry of Religion Affairs Arfi Hatim said during a hearing with Commission I of the DPR in Jakarta, Monday (21/1).

According to Arfi, there are at least two reasons why biometric records will be troublesome and give burden for the pilgrims. First, it is Indonesia’s vast geographical conditions. According to him, it is not possible for all pilgrims to perform biometric records. Moreover, offices of the Visa Facilitation Service (VFS) Tasheela company that conduct biometric records are only available in 30 major cities in Indonesia.

Second, the pilgrims will be charged additional fees due to the policy. Taking biometrics has additional costs, Arfi said, citing the example of a Papua resident who must go to Ambon or Makassar to perform biometrics record.

On that occasion, Director of the Immigration Traffic of Ministry of Law and Human Rights Cucu Koswala said that the biometric recording policy for Umrah pilgrims through VFS Tasheel must be evaluated. The Government must protect Indonesian citizens data, Cucu added.

Cucu also expressed belief that the data to be sent to Saudi is vulnerable to abuse and for this reason, biometric policies need to be postponed until biometric infrastructure in Indonesia is adequate.

In the meantime, Commission I of the DPR advised the Government to urge Saudi Arabia to postpone the implementation of biometric records as a condition for visa issuance in order to provide protection to Indonesian citizens data that will perform Hajj and Umrah. (Humas Kemenag/ES)