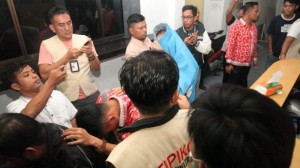 The BKN’s request was a follow-up to the findings from the KPK and the Special Criminal Investigation Directorate (Ditreskrimsus) of North Sumatera Regional Police after the arrest of the Governor of Riau Islands and the Treasurer of Regional Financial Management Agency (BPKD) Pematangsiantar, North Sumatra, several days ago.

The request for temporary dismissal is stated in the letter of Head of the BKN Number: F.26-30/V93-2/40 and F.26-30/V93-1/42, which is addressed to the Mayor of Pematangsiantar and the acting Governor of Riau Islands.

“The ASN who was named suspect in those two sting operations must be suspended temporarily, at the end of the month since the ASN were detained,” the letter reads.

The letter quotes Article 88 paragraph (1) letter c of Law Number 5 of 2014 and Article 276 letter c and Article 280 paragraph (1) of Government Regulation Number 11 of 2017 on Management of Civil Servants which stipulates that the temporary dismissal is carried out until the suspect is released after termination of investigation or termination of prosecution by an authorized official or after a final and legally-binding court decision.

The BKN called on the Governor of Riau Islands, in accordance with the provisions of Law Number 23 of 2014 on Regional Government, not to carry out duties and responsibilities as the PPK.

“The temporary dismissal for ASN named suspect and defendant is part of implementation of bureaucratic reforms,” the letter reads.

The Head of BKN also asked Mayor of Pematangsiantar and Acting Governor of Riau Islands to pay attention to the rights of civil servants who are temporarily dismissed by providing temporary remuneration in accordance with prevailing law and regulations.