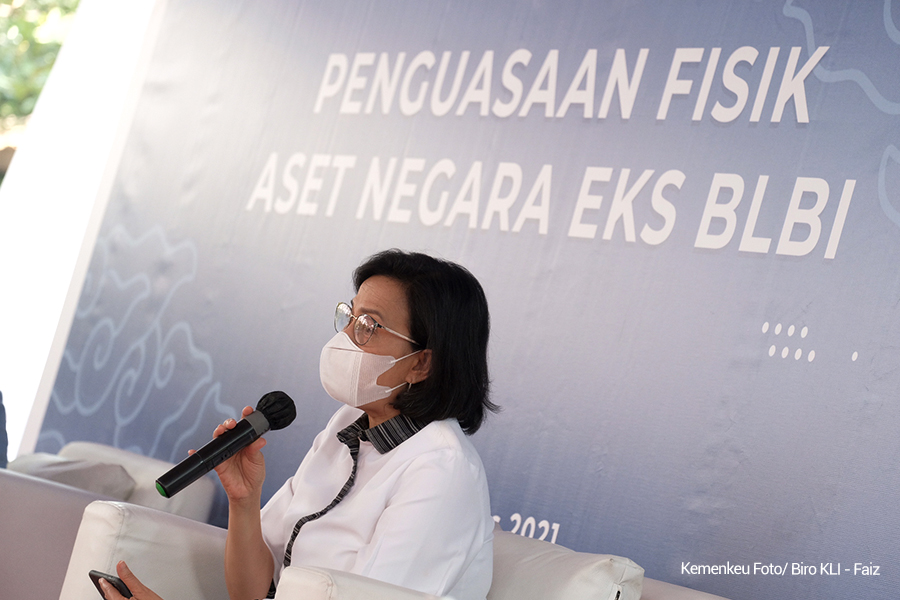 Minister of Finance Sri Mulyani (Photo by: PR of Ministry of Finance)

The Task Force for Handling of State’s Collection Rights of Bank Indonesia Liquidity Support (BLBI) Funds has again exercised control over land and/or building assets of the former BLBI.

The Task Force installed signs on assets in KaretTengsin sub-district in Central Jakarta and the Pondok Indah area in South Jakarta on Thursday (09/09).

“The two former BLBI property assets have become state property, but so far they are controlled by third parties, so physical control is needed through the installation of control signs and oversight by the BLBI Task Force,” said Director of Legal and Public Relations of the Directorate General of State Assets Management (DJKN) of Ministry of Finance Tri Wahyuningsih Retno Mulyani.

The installation of the safety signs on the assets was carried out by Head of the BLBI Task Force Rionald Silaban and attended by representatives from the State Intelligence Agency (BIN), Ministry of Law and Human Rights, the Financial and Development Supervisory Agency (BPKP), the Attorney General’s Office, Ministry of Agrarian Affairs and Spatial Planning/National Land Agency (ATR/BPN), and the National Police.

“Next, the Government will take further management in accordance with applicable regulations,” Tri said.

The first asset located in Karet Tengsin covers an area of 26,928.97 square meters with ownership documents in the form of certificates and non-certificates. Meanwhile, one plot of land of ​​2,020 square meters is located in the Pondok Indah area, in Pondok Pinang sub-district, South Jakarta.

According to Tri, the Task Force has planned an action to control and oversee the former BLBI assets of over 1,677 plots of land with a total area of ​​approximately 15,813,163 square meters spread across various cities/regencies in Indonesia.

Previously, on 27 August 2021, physical control was carried out through the installation of signs on over 49 plots of land covering an area of ​​5,291,200 square meters in Medan (North Sumatra province), Pekanbaru (Riau province), Tangerang (Banten province), and Bogor (West Java province). (PR of Ministry of Finance/UN) (FI/LW)