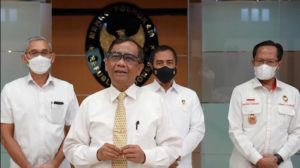 In a bid to tackle the issue of state collection rights for the Bank of Indonesia Liquidity Assistance (BLBI) Funds, the Government through Coordinating Ministry for Political, Legal, and Security Affairs has announced that it will strengthen the BLBI Task Force.

Coordinating Minister for Political, Legal, and Security Affairs Mohammad Mahfud MD on Thursday (07/10/2021) said that based on the new Presidential Decree issued on 6 October 2021 on the BLBI task force, there will be additional personnel namely Ministry of Agrarian Affairs and Spatial Planning/Head of the National Land Agency and Chief of the Criminal Investigation Agency in order to resolve the issue.

For the record, the BLBI Task Force was established to handle and restore state rights in the form of state billing rights for the remaining state receivables from the BLBI funds and property assets. Although, Mahfud added, it is essentially a civil law matter, but criminal law problems are possible to arise.

To date, Mahfud said, effective measures have been carried out by the task force including ensuring assets that should be controlled by the state and confiscating money that belongs to the state, adding that most of obligors were committed to pay.

In order to optimize the measures, Mahfud affirmed that the BLBI Task Force will take decisive action for obligors who are not serious in fulfilling their obligations to pay.

Furthermore, Mahfud underscored that if there are the BLBI obligors that do not want to pay off their debts to the state and they do not want to resolve the issues through proper process, the Government will carry out confiscation or enforce criminal law. (PR of Coordinating Ministry of Political, Legal, and Security Affairs/UN) (AP/LW)