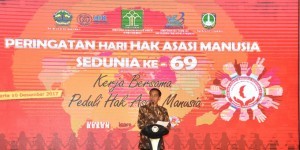 President Joko Widodo speaks at the Commemoration of the 69th World Human Rights Day on Sunday (10/12), at the Hotel Sunan, Solo

The statement was made by President Joko Jokowi Widodo during the Commemoration of the 69th World Human Rights Day on Sunday (10/12), at the Hotel Sunan, Solo.

According to the President, that principle is the reason why he always conducts blusukan (impromptu visits) to directly observe the situation of the people on the ground.

Therefore, President Jokowi always tries to guard every government policy, from the upstream to downstream, starting from controlling, checking, to monitoring.

We always pay attention to the situation on the ground in terms of public interests, the President added.

President Jokowi further said that all policy makers, politicians, bureaucrats, social leaders, and entrepreneurs should also see the situation based on the views and sides of the public interest.

At the beginning of his remarks, President Jokowi explained that the implementation of human rights in every aspect of the life of the people and of the nation must be improved.

Not only civil rights and political rights must be ensured, the Government must also ensure economic, social and cultural rights that can affect political rights of citizens, the President firmly said.

Currently, the President added, the Government continues to strive to ensure that all people can get decent jobs and income although it is not an easy task.

I realize that there are many things to be improved so that all people can get access to good health service, education, and other public services. And, to ensure that freedom of religion, as well as cultural expression and arts to get maximum protection, the President added.

I also thank the National Commission on Human Rights, and other commissions, as well as fellow human rights activists who always fight for a sense of justice among the people, the President added.

Nevertheless, President Jokowi realized that there are many important tasks for the Government in the enforcement of human rights that have not been completed, including the issues on human rights violation.

It takes hard work from all of us, cooperation between central and regional government, and participation of all people. And, through cooperation, we can bring justice to human rights, bring social justice to all Indonesians,
President Jokowi said as quoted by the Deputy for Protocol, Press, and Media of the, Secretariat of the President, Bey Machmudin.