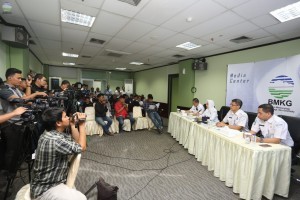 The Meteorology, Climatology, and Geophysics Agency (BMKG) warned against possibility of extreme weather, particularly in the period of 20-22 December 2018, while the slight decrease of rainfall is forecast during the Christmas holiday period (23-25 December 2018).

Head of the BMKG Dwikorita Karnawati stated that heavy rain is forecast to occur in several regions from 20 to 22 December 2018, triggered by strengthening of cold air flow from Asia which interacts with the wind meeting area around the southern part of Sumatra and the western part of Java.

Dwikorita urged the public to remain vigilant and careful about the impacts of the weather, including floods, landslides, flash floods, water inundations, strong winds, fallen trees, and slippery roads.

Dwikorita went on to say that cloudy sky and light rain will occur in most parts of Indonesia during the Christmas holiday period from 23 to 25 ??December 2018 while heavy rain may occur in West Sumatra, Bengkulu, Lampung, Banten, West Java, Central Java, Yogyakarta, East Java, North Sulawesi, West Nusa Tenggara, and Papua.

Dwikorita further said that from 26 December 2018 to 3 January 2019 the supply of water vapor in Indonesia will be relatively decreased, resulting in less cloud cover in the western part of Indonesia.

“Generally the weather will be cloudy with mild to moderate rain potential in some areas,” Dwikorita explained.

Given the increasing flow of people during holiday season, Dwikorita also reminded the public to be aware of the potential for high waves in the next few days. It is predicted that 2.5 to 4.0 meter high waves can occur in western part of Mentawai, Enggano, West Indian Ocean, and South Banten.

“The people who live in coastal areas as well as fishermen have to be aware of the possibility of high waves and strong winds until the end of December 2018,” Dwikorita stated, adding that the BMKG staffs are ready in all airports in Indonesia to inform the weather conditions to all domestic and international airlines. (Humas BMKG/ES)