BMKG Predicts the Climate in 2017 Will be Drier

Although it is still January, President Joko Jokowi Widodo thought that the signs of drought have appeared. 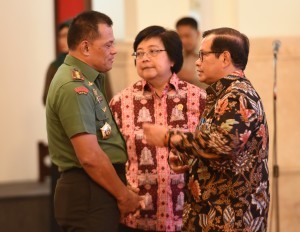 Cabinet Secretary Pramono Anung has a discussion with the Commander of TNI Gen. Gatot Nurmantyo and Minister of Environment and Forestry Siti Nurbaya, before the 2017 National Coordination Meeting on Forest and Land Fire Mitigation, at the State Palace, Jakarta, Monday (23/1) morning (Photo: PR/Rahmat)

Therefore, the President reminded his administration to be alert. Moreover the Meteorology, Climatology, and Geophysics Agency (BMKG) has predicted that the climate in 2017 will be drier. So, all of us must be really careful, the President firmly said in his briefing to the participants of the Opening of the 2017 National Coordination Meeting on Forest and Land Fire Mitigation (Karhutla), at the State Palace, Jakarta, Monday (23/1) morning.

The President asked to formulate in details the action plans of land and forest fire mitigation in 2017 and also reminded to set emergency preparedness as early as possible.Dont wait until the problems occur. Immediately release the emergency letter, particularly for the regions that are prone to forest and land fires, the President reminded.

The President also emphasized to strengthen early detection system in the regions prone to forest and land fires, such as in Riau, West Kalimantan, East Kalimantan, Central Kalimantan, and Papua provinces.

The President also asked his administration to actively check the condition on the ground, not just monitor it behind their desks.

The President also reminded that what he had delivered in 2015 and 2016 about reward and punishment still applies.I also need to remind the Commander of Indonesian National Defence Forces(TNI)  as well as Chief of Indonesian National Police (Polri) to give reward as well to the regions in which forest and land fires do not occur. Accordingly, they should not hesitate to give punishment to regions that suffer from the fires, the President asserted.

Regarding canal blocking for forest and land fire mitigation, the President confirmed that the amount is quite many. In 2016, there was about 11,000 canals. However, the President added, it is still not sufficient and the work will be continued by the Ministry of Public Works and Public Housing, Peat Restoration Agency, and Ministry of Environment and Forestry.Please dont forget, private companies that own the forest areas should be also responsible to make blocking canals, the President added.

Regarding artesian well, according to the President, in 2016 it was still not many, but in 2017 there will be a lot of wells to be made. The President reminded that the private companies are also responsible to make these wells so that the incident can be anticipated and the fire can be put out immediately.

Meanwhile, regarding fire mitigation post, the President reminded that the post is not necessarily in form of a building. However, it must be established in Subdistrict level, and if it is possible, up to village level.It is important to involve local people. With a joint patrol system as well as capacity building, public awareness could be increased. The people should be reminded as well as educated about the importance of fire anticipation, the President further said.

President Jokowi also delivered about the importance to check the preparedness of air operation to prevent forest and land fires.

There should be a quick move since the beginning so that when there are signs of hotspot, it can be decided immediately whether it needs weather modification or waterbombing, the President stated.

Concerning the plane, the President reminded that it must be always ready so when a little hotspot appears, it can be immediately anticipated. Dont wait until the fire gets bigger. It will be too late if we work like this. The plane must be prepared first. This is what we call anticipation, the President further said.

Law Enforcement Apparatus Must be Assertive

In regards to law enforcement, President Jokowi asked law enforcement apparatus to be assertive in solving forest and land fire cases. I remind once again, there is no compromise for the things related with forest fires. Any violation must be processed and the legal decision must be executed immediately so that no one has courage to make criminal offense, the President firmly said.

The President also reminded all private companies to follow the rules. If they already get concession, their areas must be taken care of and prevented from forest and land fires. The President reminded that in 2015-2016 there were several land managements whose permit were revoked, suspended, and were given a warning.

The President asked the Central Government, TNI/Polri, as well as Regional Governments to cooperate and strengthen the synergy either in planning the actions to prevent the fires or in making action to anticipate the fire while it is still small.

Thus, this time we could prevent forest and land fires so that it will not occur in 2017, the President said.