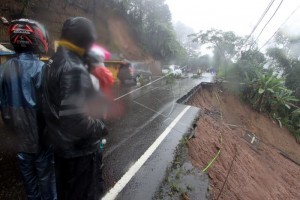 Head of the Meteorology, Climatology, and Geophysics Agency (BMKG) Dwikorita Karnawati said that many regions in Indonesia are currently still experiencing rainy season.

This condition, she said, is caused by quite a strong west wind since January and it is forecasted that until March many regions in Indonesia will still experience the peak of rainy season.

In the meantime, Greater Jakarta (Jakarta, Bogor, Depok, Tangerang, and Bekasi) Dwikorita added, are also experiencing the peak of the rainy season, with chance of rain with medium to high intensity until the next one week.

Therefore, Dwikorita urged the people to exercise caution against potentials of inundation, floods, and landslides.

Be vigilant against heavy rain with winds that can uproot trees and do not take shelter under trees when it is raining and thundering, she said.

Regarding hydrometeorology disasters, such as landslide that hit Puncak area in Bogor and floods in several areas in Jakarta due to the overflowing of water in Katulampa sluice gate, both of which claimed lives, Dwikorita said that the two disasters were caused by, among others, extreme rain in Puncah area in two consecutive days.