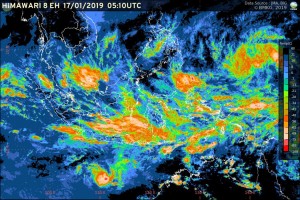 In addition, there is low pressure center in South Indian Ocean of Java and several wind circulation that can form a convergence pattern/convergence zone that extends from western waters of Sumatra, Java to Banda Sea.

“The convergence zone will significantly lead the growth of rain clouds,” Deputy Head of the BMKG for Meteorology Mulyono R. Prabowo said during a press release on Wednesday (17/1).

“This condition can lead to heavy rain which can be accompanied by lightning and strong wind in the next few days in some regions of Indonesia,” Mulyono explained.