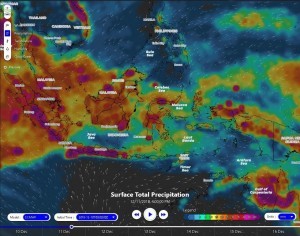 Information from the BMKG on Disaster Preparedness. Photo by: the BMKG.

Increased rainfall in the rainy season may cause hydro meteorological disasters in most parts of Indonesia, according to the Meteorology, Climatology and Geophysics Agency (BMKG) in its press release, Thursday (13/12).

“There are 72 floods, 74 landslides, and 77 tornadoes occur in several regions last November,” the release states.

Deputy of Climatology of the BMKG Herizal stated that the highest rainfall recorded in last November was 400 mm, which dropped in a single day in Karang Nunggal, Tasikmalaya, while the highest accumulation of rainfall (1,325 mm) occurred in the same location.

Based on updated data of the BMKG on 13 December 2018, 62% of Indonesia’s territory was declared to have entered the rainy season.

Herizal also warned the public to be aware of areas forecast to have high rainfall, especially in flood-prone areas such as most of Sumatra, Banten, parts of West Java, parts of Central Java, parts of Kalimantan, West Sulawesi, Central Sulawesi, and a small part of Papua. He also said that a more detailed, 10-day flood potential map has been prepared by the BMKG, the Geospatial Information Agency (BIG) and Directorate General of Water Resources of the Ministry of Public Works and Public Housing (DJSDA-PU).

In the meantime, anti-trade winds monsoon circulation will occur in Indonesia until the end of December 2018, while other areas were dominated by trade winds (southern part of Sumatra, Java, Bali and Nusa Tenggara) and south winds (southern regions of the equator), Herizal said

In general, the western part of Indonesia will receive additional water supply due to the active MJO (Madden-Julian Oscillation)/wet air mass so that rain clouds are easier to occur, Herizal stated.

Regarding the global El Nino phenomenon, Herizal said that the World Meteorological Organization (WMO) has stated that El Nino conditions had been fulfilled in terms of the warmth of the Pacific Ocean, but the interaction between the oceans and the atmosphere has not occurred. “The atmospheric movement has not shown a situation that normally occurs in El Nino conditions,” he said.

According to Herizal, the BMKG finds the warming of sea surface temperatures in the central and eastern Pacific indicates a weak El Nino (> 0.5 – 1.0 ?), while in the end of November 2018 the Indian Ocean showed a positive dipole mode conditions that did not contribute to the addition of water vapor in the western part of Indonesia.