BMKG Warns of Heavy Rain at the End of January 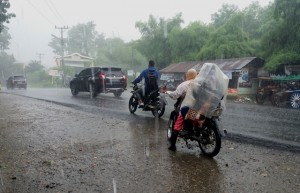 The Meteorology, Climatology, and Geophysics Agency (BMKG) on 16 January 2019 issued a warning and called on the public to remain vigilant and cautious ahead of the peak of rainy season this year.

Particularly be vigilant of the impacts of high rainfall that can lead to hydro meteorological disasters including floods, landslides, flash floods, strong wind, which are predicted to intensify by the end of January this year, Deputy Head of the BMKG for Meteorology Mulyono R. Prabowo said in a press release on Tuesday (22/1).

The BMKG also detected a convergence pattern of wind circulation that extends from soutern part of Sumatra, Java Sea, East Java, Bali, to West Nusa Tenggara and East Nusa Tenggara in the past few days.

In addition, the Jakarta Tropical Cyclone Warning Center (TCWC) informed that there are three potential tropical cyclones near the Indonesian territory.

One of them is located in Timor Sea (94S) and is predicted to become a tropical cyclone in the next three days, resulting in a potential for extreme weather including strong wind of more than 25 knot in several parts of Indonesia such as Riau, Riau Islands, Jambi, South Sumatra, Bangka Belitung, Banten, Special Capital Region of Jakarta (DKI Jakarta), Central Java, East Java, Bali, West Nusa Tenggara, East Nusa Tenggara, Southeast Sulawesi, and South Sulawesi, Mulyono explained.

We urged the public to remain vigilant and cautious of the impacts of high rainfall and strong wind that are predicted to occur at the end of January 2019, Mulyono said, adding that the impacts include floods, landslides, flash floods, inundations, strong wind, fallen trees, and slippery roads. (EN/Humas BMKG/ES)