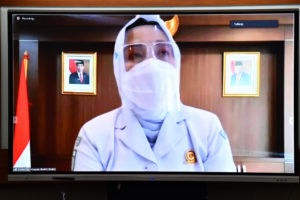 Head of the BMKG Dwikorita Karnawati. Photo by: PR of Cabinet Secretariat/Rahmat.

The Meteorology, Climatology, and Geophysics Agency (BMKG) has appealed to the public to stay vigilant for potential extreme weather during the transition period from dry season to rainy season.

“Extreme weather may occur during this year’s seasonal transition period. The extreme weather can be in the forms of rain accompanied by lightning and strong winds and hail,” Head of the BMKG Dwikorita Karnawati said on Wednesday (09/22).

Dwikorita said that various wind direction could suddenly change weather condition from sunny to rainy or vice versa. Generally, the weather is usually sunny in the morning, then the clouds begin to form in the afternoon, and rain falls in the afternoon or evening.

“Rainfall can be one of the triggers for hydrometeorological hazard, such as flash floods and landslides. To that end, we appeal to the people who live in landslide-prone hilly areas to stay vigilant,” she said.

In the meantime, the BMKG Head Deputy for Meteorology Guswanto said that signs of extreme weather could be seen in the Greater Jakarta area on Tuesday (09/21) when hail accompanied by strong winds occurred around the city of Depok and caused treefalls and other damages.

Guswanto further said that the BMKG continues to update weather forecast that can be accessed by the public through the InfoBMKG application. (PR of the BMKG/UN) (RI/MUR)