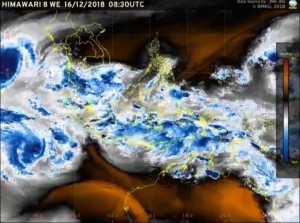 After detecting a potential cyclone which has been developing since 12 December 2018 on the Indian Ocean, Tropical Cyclone Warning Center (TCWC) Jakarta informed that it has finally become a tropical cyclone on Saturday (15/12) about 1,400 km of Bengkulu, southwest of Sumatra.

The tropical cyclone named Kenanga was formed in the TCWC Jakartas Area of Responsibility, Deputy for Metereology Division of the Meteorology, Geophysics and Climatology Agency (BMKG) Mulyono R. Prabowo said.

The cyclone that can reach the maximum sustained wind of 40 knots or 75km/hour near the center is forecasted to move southwest away from Indonesia’s territory and is estimated to be around 2,754 km from the Indonesian territory in the next 72 hours.

This cyclone will create indirect impacts, among others increase of wind speed in some parts of the west coast of Sumatra and increase of high waves up to 2.5 – 4 meters from Mentawai Islands waters to Sunda Strait, Mulyono added.

The dominance of air masses from the south tends to reduce rainfall in some parts of Sumatra and Java. On the contrary it will increase rain intensity in the central and eastern parts of Indonesia.

Potential areas of heavy rainfall from 17 to 19 December 2018 are among others:

BMKG to warn the public to prepare for extreme weather impacts in Sumatra, Java, and Kalimantan from 20-23 December 2018.

Cold air flow from Asia is predicted to re-enter Indonesian territory and form a convergence area and trigger an increase in rainfall in the western part of Indonesia.

Areas that have the potential for heavy rainfall during this period include:

BMKG also warns the public to stay alert about the potential of hydrometeorological hazards, such as flash floods, landslides, and strong winds, particularly on regions that have been hit by heavy rain in a few days.