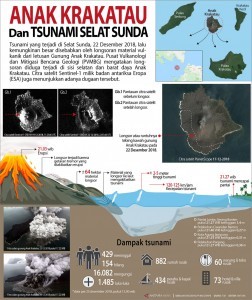 The National Agency for Disaster Management (BNPB) stated that as of Tuesday (25/12) at 1:00 p.m. Western Indonesian Time, death toll from the tsunami in Sunda Strait has reached 429.

“It is possible that the death toll will increase,” Head of Information Data Center and Public Relations of the BNPB Sutopo Purwo Nugroho said during a press conference at the BNPB office, Jakarta, Tuesday (25/12).

“Many roads and bridges were damaged by the tsunami so the aid distribution and evacuation process are hampered,” Sutopo said.

Regarding the status of the disaster, Sutopo said that the tsunami is declared as local disaster because the local Governments (with supports from the Central Government) are still able to handle the disaster. (*/BNPB/ES)