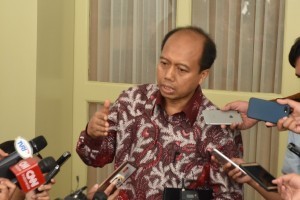 One week after the quake and the tsunami hit Central Sulawesi province, the Government has made significant progress in relief efforts, according to Head of Information Data Center and Public Relations of the National Disaster Mitigation Agency (BNPB) Sutopo Purwo Nugroho.

He added that electricity and communication system have also been restored in almost half of the affected areas and the problem of fuel supply has been almost 70 percent resolved.

We need time in the relief efforts. Its impossible to resolve it in just one day. However, condition in the affected areas are better now, Sutopo told reporters after meeting with President Joko Jokowi Widodo, at Bogor Presidential Palace, West Java, Friday (5/10).

Regarding electricity, Sutopo said that the problem has been overcome thanks to the hard work of state-owned electricity company PLN and assistance from local residents.

Initially, continued Sutopo, the Government has decided on six main needs in the efforts, namely air transportation with aircraft that can land on 2,000 meters runway, medical assistance such as medical personnel and field hospitals, generators for electricity, water treatment, fogging, and tents.

After an evaluation, we decided that what we need most are air transportation, generators, tents, and water treatment, Sutopo said, adding that now the assistance has arrived and been sorted.

Sutopo added not all the international assistance can be accepted because it must be adjusted in accordance with what the Government needs. He added that the countries that wish to provide aid in the form of money will be welcome to send it to the BNPB account which will be announced by Ministry of Foreign Affairs.

The money will be spent on rehabilitation and reconstruction phase which will certainly require more money, he added.

We currently focus on emergency response to search and rescue the victims, evacuation, assistance to affected residents, and emergency repairs, Sutopo said.

Thereafter, Supoto continued, the Government will move to the next phase and will discuss with related stakeholders through a coordination meeting. The rehabilitation and reconstruction phase will last for 2 years, Sutopo concluded. (DNA/JAY/ES) (GWH/EP/Naster)