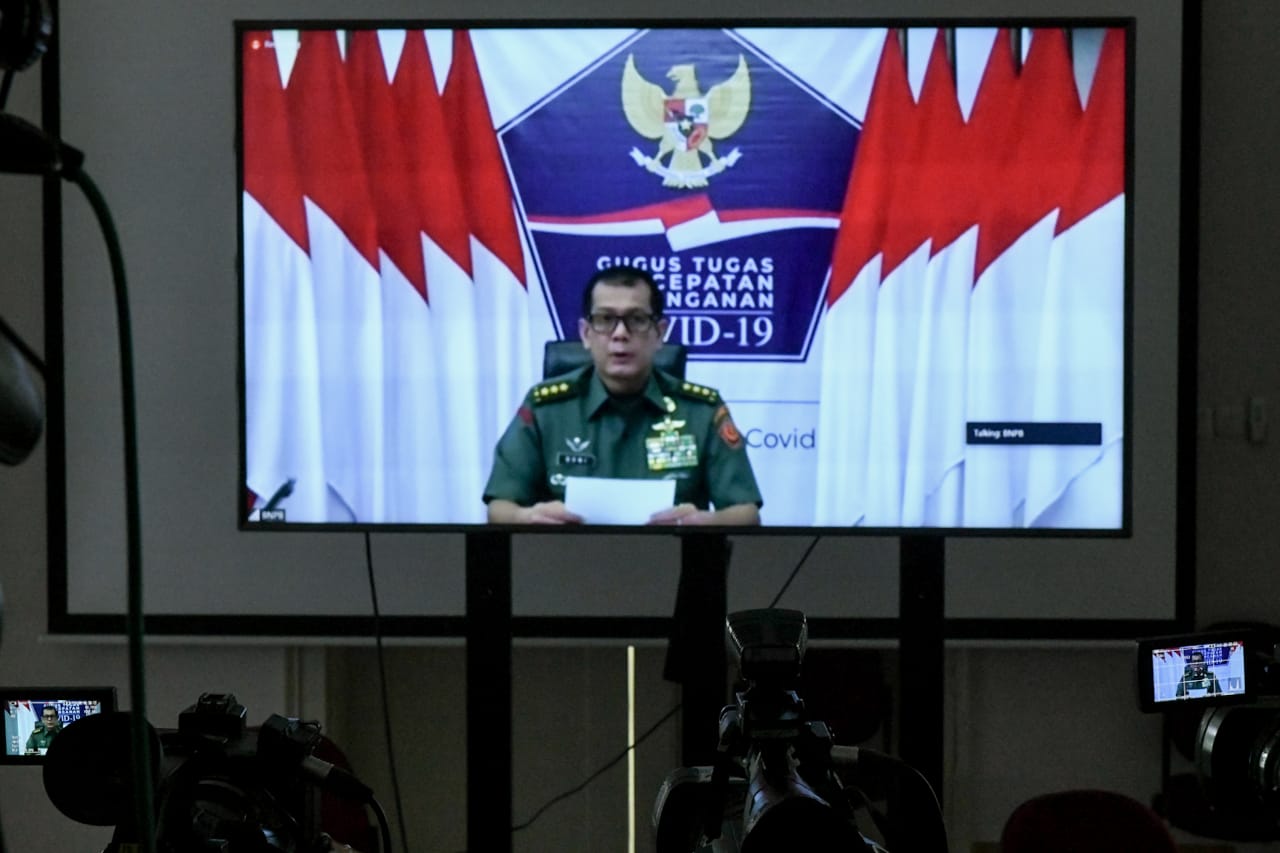 Head of the COVID-19 National Task Force Doni Monardo delivers statement in a press conference after a limited meeting, Monday (11/5). (Photo by: PR/Ibrahim)

The implementation of Large-Scale Social Restrictions (PSBB) in the regionals has progressed quite well, Head of the National Disaster Management Agency (BNPB) and COVID-19 Task Force Doni Monardo has said.

“In Jakarta, on 5 April, the confirmed case reached 50% of the cases at the national level. After the implementation of PSBB, on 5 May, there was a decrease in the number of confirmed cases in Jakarta, it reduced to 39% of the national cases,” Doni said after a limited meeting, Monday (11/5).

Doni stated that 70% of the national confirmed cases, 82% of the COVID-19 deaths, and 59% of the recoveries come from Java Island.

“The Task Force encouraged the initiatives of the regions, especially those whose positive confirmed cases have increased, to propose for approval on PSBB implementation to the Health Minister,” Doni said, adding that this initiative is important to avoid people mobilization to other regions.

According to the BNPB Head, President Joko “Jokowi” Widodo has assigned the Task Force, Health Ministry and all laboratories in Indonesia to examine approximately 10,000 specimens a day, which has not realized yet.

Likewise, continued Doni, the Task Force will strive to provide incentives to laboratory workers so that they can work more optimally.

“If so far the rotation is only once or a maximum of 2 times, then we expect the rotation can be an average of 2 times. Even if the human resources are sufficient and the amount is sufficient, it can reach 3 times,” the Head of BNPB said.

For this reason, he hopes that these human resources can work 24 hours and thus there are around 280 (thousand) of Persons in Monitoring (ODP) and Patients Under Supervision (PDP) which must be handled in the shortest time possible.

Doni said that 60 laboratories have started to be utilized, while 50 more laboratories will start to operate.

The Task Force, Doni stated, also cooperated with Ministries/Institutions as well as airport and port authorities to install PCR machines in strategic places, such as the entrance and return points of each region.

The Task Force has also proposed the use of hajj boarding houses for temporary isolation of Indonesian ship crew members, students, and members of Jama’ah Tabligh congregation to ease supervision and control. Those who are declared negative after PCR swab test will return to their respective regions. Those who are confirmed COVID-19 positive will be taken to Wisma Atlet emergency hospital for Jakarta and also those in Batam will be taken to Galang Island.

Due to a significant increase in cases in several regions, especially East Java, Doni continued, the Government instructed the Kogabwilhan (Joint Regional Defense Command) II to assist provincial, regency/municipal governments. “Kogabwilhan II is certainly expected to utilize elements of the defense forces, especially the Marine Corps. The defense forces elements which are highly valued by the public are expected to make the public be more inclined to obey the health protocols,” he said.

Meanwhile, Doni stated, there is an increasing trend of confirmed cases resulted from the increased capacity of testing. However, on the latest development, the referral hospitals determined by the Ministry of Health have experienced a very significant decrease. “This shows that the number of patients recovering is increasing, while the number of new patients being treated is also getting smaller,” he said.

Doni urged the public to face this condition in a serious manner, to obey the health protocols, in order to break the chain of transmission. (TGH/EN)