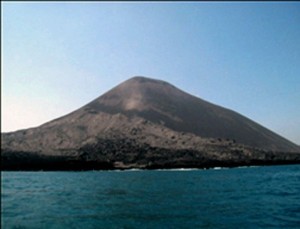 Residents and tourists are prohibited from carrying out activities within 5 kilometers radius from Mount Anak Krakatau peak amid increased volcanic activity, Head of Information and Public Relations Center of the National Agency for Disaster Management (BNPB) Sutopo Purwo Nugroho said in a statement on Thursday (12/27).

For this reason, the Volcanology and Geological Disaster Mitigation Center (PVMBG) has raised the alert status of the mountain from Caution (Level II) to Alert (Level III) starting from 27/12/2018 at 06.00 am WIB (Western Indonesian Time) with dangerous zones expanded from 2 kilometers to 5 kilometers, Sutopo said.

Based on data from the PVMBG, Mount Anak Krakatau is currently active and has entered eruption phase from July 2018. The next eruption is Strombolian type, meaning that the eruptions followed by the flowing of incandescent lava, heading to the southeast irregularly.

On 22 December 2018, there was an eruption but smaller compared to the eruption of the September-October 2018 period.

The results of the analysis of satellite imagery have showed that the west-southwest slope collapsed and entered the sea. This is the possibility that triggered the tsunami, Sutopo explained.

Since 22 December 2018, a Surtseyan type of eruption or the flow of lava or magma contact directly with sea water has been observed, meaning that the volume of magma released by the mountain was increased and enlarged the crater hole.

There may be a new crater hole that is close to the sea level. Since then, the eruption occurred continuously and the sound of eruption was heard several times per minute, Sutopo added.

On Wednesday, 26 December 2018, the eruption of hot clouds and Surtseyan was observed. Meanwhile at present, Strombolian eruptions followed by the flowing of incandescent lava and hot clouds is still ongoing.

Wind flow has brought the ash rain to the east, causes thin volcanic ash fall on Cilegon and part of Serang on 26 December 2018. Fortunately, this is not dangerous as the volcanic ash actually can help fertilizes the soil, he added.

Observation on Mount Anak Krakatau on 27 December 2018 at 00.00 – 06.00 WIB showed that the eruption of the mountain was still ongoing, with continuous tremor with an amplitude of 8-32 millimeters (dominant 25 millimeters), and a banging sound.

The PVMBG recommended the residents and tourists not to carry out activities within a 5 kilometers radius of the crater peak because the rocks, hot clouds, and thick volcanic ash may hit them.

Meanwhile, the Meteorology, Climatology, and Geophysics Agency (BMKG) recommended residents not to carry out activities on the coast within 500 meters to 1 kilometer radius as an anticipation of a subsequent tsunami. At the same time, the people are encouraged to remain calm and increase their awareness to tsunami.