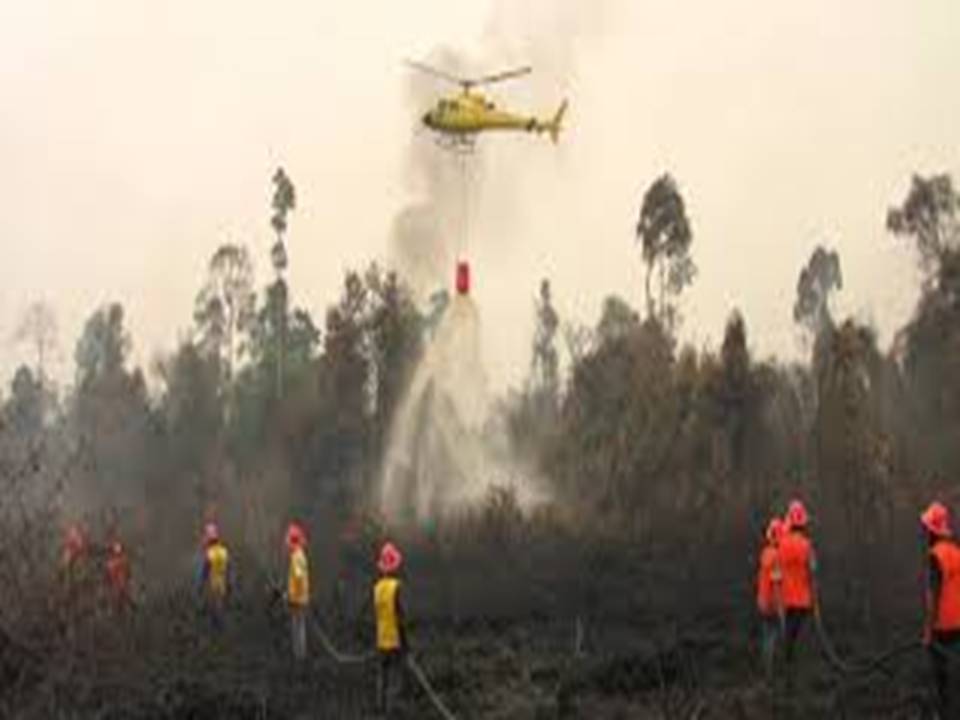 In Riau, there is 1 helicopter Bolco and 1 Sikorsky for water bombing. 300 army personnels mobilized to extinguish the hotspots. Manggala Agni and volunteers are also involved. In South Sumatera, 3 helicopters included Bolco, MI-8 and Kamov are deployed. BPBD coordinated with local institution in charge in that matter then mobilized 120 personnels to extinguish the fire. In Central Kalimantan, putting out the fire is done through water bombing with helicopter MI-8 and on land, which carried out by joint teams between BPBD, TNI (military), Polda (police), BMKG (State Agency for Meteorology, Maritime and Geophisical), Forestry Board, Manggala Agni, and volunteers. In West Kalimantan, putting out the fire is done on land.

Smoke in Kalimantan is heading to the northeast toward Kalmaegi cyclone vortex. In Sumatera, the wind blows toward north and northeast caused smoke from South Sumatera spread to Riau. Even the smoke from Riau and South Sumatera spread to Singapura, caused the index air polution (ISPU) in Singapura and parts of Malaysia increase to moderate level. According to Sutopo Purwo Nugroho the cause of wildfires mostly from fire at crops fields and forest.

He adds that peaks of dry season is expected to ends in October of this year, therefore if there is no actions to control then the wild fires is potentialy expand. Based on data during 2006-2014, the patters of hotspots in Sumatera would dominantly be in June to October. While in Kalimantan would be in August until October. It would reachs to the peak during September to October. Wildfires is happening on peatlands which is hardly to be extinguished.

Coordinator Minister For People Welfare (Menkokesra) Agung Laksono on Tuesday (16/9) calls for all institutions in charge to handle the smoke caused by forest and land fires which happenned in some places in Indonesia.

In addition, Menkokesra explains that government has done coordinated related institutions in the efforts of drought handling, including forest fires which caused smog. Moreover, government has mapped water sources nearby drought areas. After that, with Ministry of Agriculture shall make an action plan.

The Effects of Smog

Head of Environtment Agency in Pontianak, Multi Junto Bhatarendo, on Wednesday (17/9) said the smog has been covered Pontianak and places nearby for days, that people were urged to use a mask to protect them from any particle from combustion.

Thik smog covered Syamsudin Noor Airport in Banjarmasin, South Kalimantan, that has 7 times delayed flights. In Sumatera, the smog has started covering Batam, Riau Island, but it does not effected activities on Hang Nadim International Airport. BPBD in Jambi province stated, the smog has not really circumscribing activities in Jambi, although it has caused delay of many flights either.