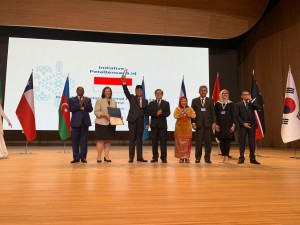 Congratulations (the BNPB) on receiving the award, may this innovation continue to be developed and helpful for all Indonesians, said Minister of State Apparatus Empowerment and Bureaucratic Reform (PANRB) Syafruddin who represented the BNPB receiving the award, at the Heydar Aliyev Center, Baku, Azerbaijan, Monday (24/6).

Syafruddin considered this award as a concrete appreciation for Indonesian people who become more responsive to the improvement of public services. This award, the Minister added, will promote Indonesia to other countries.

Indonesia has been participated in the UNPSA since 2014, and has so far submitted five innovations. In 2015, two of five Indonesia’s nominees for the UNPSA competition were among the runners-up. Three years later, Reducing Malaria Cases Trough Early Diagnosis and Treatment (EDAT) system initiated by the Health Office of Bintuni Bay sub-district, West Papua won the 2018 UNPSA. This year, Indonesias innovation initiated by the BNPB has been named as one of the winners of UNPSA.

This will serve as a momentum to promote Indonesias good reputation to the global community, he said.

For the record, PetaBencana.id is a free web-based platform that produces megacity-scale visualizations of disasters using both crowd-sourced reporting in real time. The platform makes the best use of social media and instant messaging during emergencies and disasters to compile and filter the latest condition which has been confirmed by residents living around that area.

The platform which is developed by the BNPB in collaboration with Massachusetts Institute of Technology (MIT), USAID, Pacific Disaster Center (PDC), Humanitarian OpenStreetMap Team (HOT) and Jakarta Disaster Management Agency has successfully gathered real-time information about flooding in 2017 when Jakarta hit by floods. At that time, thousands of people informed locations affected by the flood and more than 500,000 users accessed PetaBencana.id in less than 12 hours and contributed to realtime community flood-mapping.

Considering lack of access to valid and real-time information during extreme and unpredicted weather, the BNPB seized the opportunity to develop an innovation which can map disaster areas and anticipate conflicts following the disasters in all cities in Indonesia.

By providing real-time and valid information to the people, they can minimize loss and improve safety. PetaBencana.id invites the public to participate through social media and instant messaging to get real-time information about disasters because disaster management must be carried out quickly and precisely.

The platform was also designed to connect with messaging applications, social media, and short message service. Since the launching in December 2015, PetaBencana.id has been accessed 737,102 times by 361,478 users.