BNPP Head: We Will Do Our Utmost to Evacuate Bodies 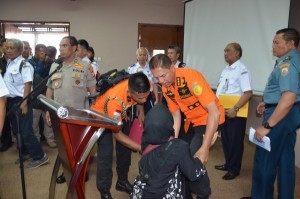 BNPP Head meets with the victims next-of-kin of the crashed Lion Air JT-610 at the Ibis Hotel, Cawang, Jakarta, Monday (5/11). (Photo by: Public Relations of BNPP)

During a meeting with next-of-kin of the victims of the crashed Lion Air flight JT-610 at Ibis Hotel, Cawang, Jakarta, Monday (5/11), Head of the National Search and Rescue Agency (BNPP) Muhammad Syaugi reported the progress of the operations to search for the victims.

We will do our utmost and work around the clock to evacuate all the victims, said tearful Syaugi.

As you may be aware, the BNPP team has conducted the search operations at the location of the crash and at sea and we will not give up. Hopefully, we are still all out in the remaining time. Even if it is up to ten days later, if there is still a possibility to find the bodies, we will continue to search for victims. I ask for your prayers so as to be able to carry out this noble task, he added.

In response, the next-of-kin gave their full support to Syaugi and the BNPP team. After the meeting, mother of one of the victims was seen approaching the BNPP head and asked him to find for her son/daughters body.

For the record, as of Sunday (4/11) at 7.00 pm Western Indonesian Time, a joint Search and Rescue (SAR) team had managed to evacuate 138 body bags to the JICT 2 Integrated Command Post, Tanjung Priok. The body bags were labeled by the National Police Disaster Victims Identification (DVI) team and subsequently transferred to the Kramat Jati National Police Hospital. Divers from a joint SAR team have also evacuated the bodies both on the surface and underwater.

As many as 33 body bags were found in the seventh day of the search operations. Apart from the seabed, the victims bodies were also found in the Tanjung Pakis coast. (Basarnas Public Relations/ES)