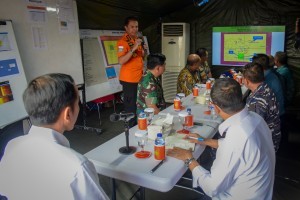 Head of the National Search and Rescue Agency (BNPP) M. Syaugi said that the search team coordinated by BNPP had found the exact location of Lion Air JT610 aircrafts debris, which crashed in Karawang waters, West Java, on Monday (29/10) morning.

We found the exact location, we have swept the area by launching a remotely operated vehicle (ROV) with a radius of 100-200 meters at the finding point of Flight Data Recorder (FDR) yesterday, there are indeed many large parts of the plane debris, Syaugi said at a press conference after accompanying President Joko JokowiWidodo to inspect the Command Post for the search of the plane, at the Jakarta International Container Center (JICT) 2, Port of Tanjung Priok, Jakarta, Friday (2/11).
According to Syaugi, the obstacle encountered at the scene is that every day the water flow is quite heavy, once the ROV equipment is launched into the sea, if it is not properly controlled, it can immediately move following the water flow, let alone the divers.

Syaugi further explained the search mechanism for Lion Air JT610 is that Victory vessel that belonged to state-owned gas and oil company Pertamina with 4 anchors is located in the large debris. Afterwards, the ROV was launched and the divers went down to ensure which one can be lifted.

For those which cannot be lifted, we used cranes, for example, we lifted the aircraft wheels by using cranes because if its done by humans, it will not work, Syaugi said, while expressing hope that by the launching of sophisticated equipment, the team can locate the fuselage.

To date, he admitted that the fuselage has yet to be located. So, we found the debris of this size. So, as of this afternoon we only found these, he said, while affirming that the search team continued to search in a larger area to ensure whether there is still the aircrafts fuselage or not.

Up to 7 days, which is on Sunday, we will analyze it again after Sunday, including the black box. The cockpit voice recorder still hasnt been found, Syaugi said, adding that the team had coordinated with the National Security Committee (KNKT) that the FDR – which records speed, angle, direction and all kinds of things- was actually enough to reveal the cause of the accident.

What was needed from the voice cockpit, Syaugi continued, was the talks between the pilot, co-pilot, and the crew. Regarding the talks between pilot and the ATC officer, according to Syaugi, Airnav has already had it.

Hopefully, we will be able to locate it soon. It is not an easy task even though it is only 35 meters deep, but the water flow is quite heavy, not to mention the waves above, Syaugi concluded.

As reported earlier, Lion Air aircraft with flight number JT-610 from Cengkareng bound for Pangkalpinang lost contact and crashed 13 minutes after took off from Soekarno-Hatta International Airport, Cengkareng, on Monday (29/10) at 06.20 am Western Indonesian Time, with 189 people on board, in Karawang waters. (MAY/EN/AGG/ES).