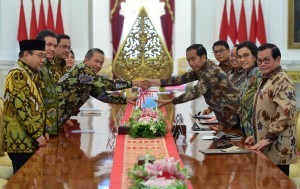 The Supreme Audit Agency (BPK) officials, led by its Chairman Moermahadi Soerja Djanegara, met with President Joko Jokowi Widodo at the Merdeka Palace, Jakarta, on Thursday (4/10) to deliver the Semester I Auditing Result Summary (IHPS)  of 2018 (IHPS I-2018).

The IHPS I-2018 also mentioned that in a period of 2003  30 June 2017, the BPK has submitted 447 audit findings worth Rp45.65 trillion indicating criminal offences to the Indonesian National Police, the Attorney General, and the Corruption Eradication Commission (KPK).

425 (95%) out of the total 447 findings worth Rp44.05 trillion have been investigated by the authorized institutions, the BPK said.

For the record, the IHPS I-2018 is a summary of 700 audit reports (LHPs) consisting 652 reports in finance aspect, 12 reports in performance aspect, and 36 reports with certain purposes.

The Agency also said that unqualified opinion (WTP) on ministries/institutions increased from 84 percent in 2016 to 91 percent in 2017.