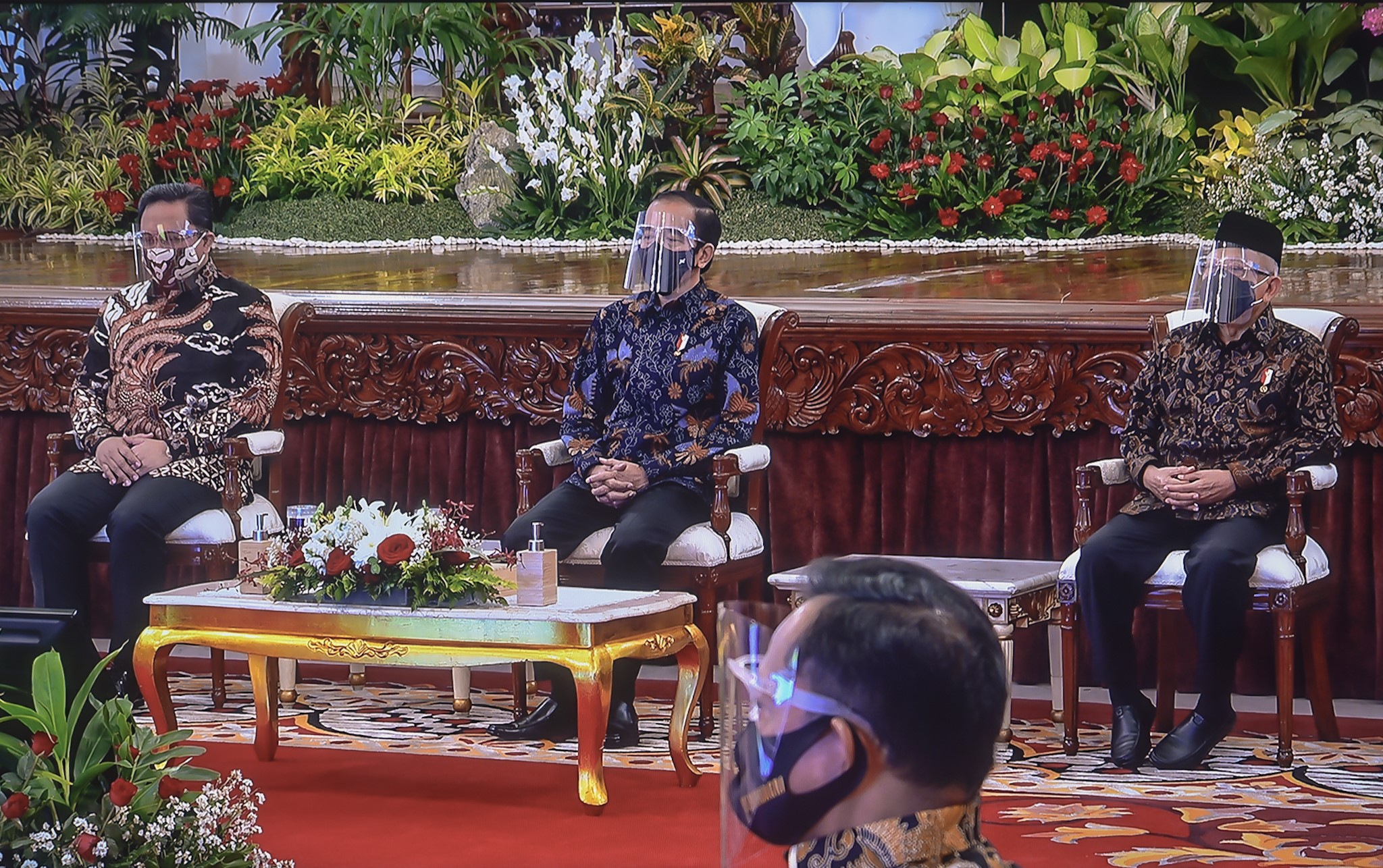 President Jokowi attends the kick-off of the audit of COVID-19 handling, Tuesday (8/9), at the State Palace, Jakarta. (Photo by: Public Relations / Agung).

President Joko “Jokowi” Widodo expressed his support for the Supreme Audit Agency (BPK) to perform financial audit of the COVID-19 handling so the crisis can be handled in a more transparent, accountable, and effective manner.

“This measure is a form of the Government’s responsibility, including the Central Government, regional governments, and other state institutions; Bank Indonesia, the Financial Services Authority (OJK), state-owned enterprises (BUMN), public service agencies and regional-owned enterprises, as well as the Indonesian National Defense Forces (TNI) and the National Police (Polri),” the President said at the kick-off of the audit of  COVID-19 handling, Tuesday (8/9), at the State Palace, Jakarta.

According to him, the pandemic has forced the central and regional governments, including the TNI, the Polri, and state-owned enterprises to take extraordinary measures in dealing with health and economic crises.

The Government, he continued, must mobilize all state apparatus to raise public obedience in following the health protocols and the action must be taken in more extraordinary, unusual, and non-conventional ways.

“The measures must be taken quickly, with simple procedures for the sake of the people’s safety. People’s safety is way more important than complicated procedures; this must be changed,” he said.

Therefore, the President said that extraordinary measures must be taken in the economic sector. He also said that social assistance in forms of basic necessities and cash assistance must be provided in order to save laid-off workers or those who have no income.

“The Government’s assistance for MSMEs, wage subsidy, and credit restructuring must be provided immediately. All of the assistance are provided to improve the country’s economic condition and to keep the economy running,” he added.

All of us must aware that the country is in a crisis. The Head of State also said that the Government must change the way of working to a more extraordinary one.

“Just like the overall global condition, we still need time to escape the crisis. The Government needs work system flexibility and simple procedures, so all problems can be handled quickly, well-targeted, and efficient,” the President said.

According to him, the Government has committed to take the opportunity of the crisis as a momentum to make a leap.

“Take the opportunity to establish a new working system; build a new institution that is able to compete in global competition,” he said.

The President, from the beginning, has ordered all levels of the Government to always uphold accountability, transparency, and innovation by always prioritizing main objectives of the programs being implemented.

“We highly appreciate the BPK’s efforts to find better ways to restore public health, the economy, and to make a leap of progress. I hope that every auditor shares the same view to prioritize the public, the nation, and the state interests,” the President concluded. (FID / EN)