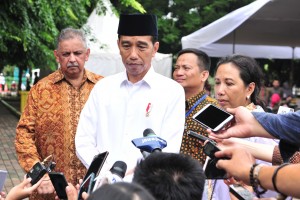 President Joko Jokowi Widodo asserted that in the acceleration of land certificates, the public only needs to pay fee for staking out the land. It is based on an agreement applies in every provinces that they must pay for this fee.

The fee, according to the President, is charged by the subdistrict office, not by the National Land Agency (BPN). If the BPN asks to pay it, he called on the people to report this matter.

Please report it if you find the case. However, there is indeed fee for staking out the land charged by the subdistrict office, but not by the BPN. If the BPN asks for fee, report it, President Jokowi responded to reporters questions after inspecting Fostering Economy for Prosperous Families (known as Mekaar) program conducted by a state-owned financing company Permodalan Madani Nasional (PMN), at Bekasi City Square, West Java, Friday (25/1).

Report it, since the fee is already covered by the Government in the budget, President Jokowi firmly said.

According to him, the public can report the violation to the Illegal Levy Eradication Unit (Saber Pungli) or to the police. President Jokowi also warned to be careful to irresponsible people who tries to get personal benefits from every program.  (FID/JAY/ES)