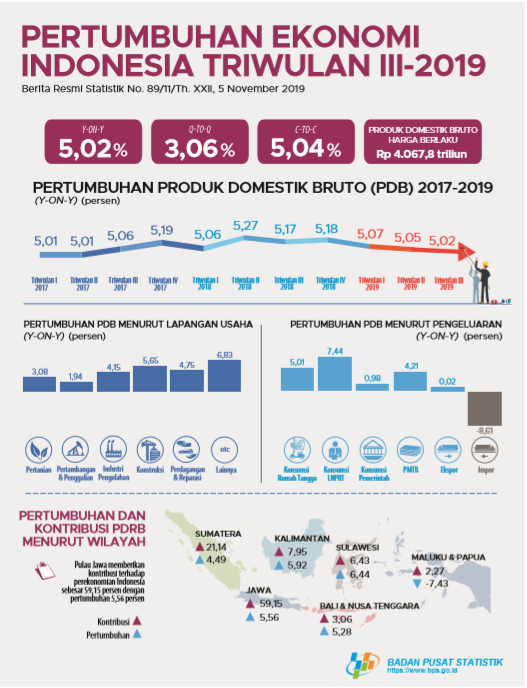 Indonesia’s economy in third quarter of 2019 grew by 5.02 percent year on year compared to that in the third quarter last year, Statistics Indonesia (BPS) has reported.

“The highest economic growth was reported in other services at 10.72 percent, followed by company services at 10.2 percent; health services and social activities at 9.19 percent; and information and communication services at 9.15 percent,” BPS Head Suharyanto said in his press statement in Jakarta, Tuesday (5/11).

According to Suharyanto, Indonesia’s economy until the third quarter of 2019 (c-to-c) grew by 5.04 percent in all fields of business.

Furthermore, Indonesia’s economic growth stood at 3.06 percent compared to that in the second quarter of 2019 (q-to-q), Suhariyanto added.

Suhariyanto also said that the spatial structure of the Indonesia’s economy in the third quarter this year was still dominated by the provincial groups on Java Island, which contributed 59.15 percent to the Gross Domestic Product, followed by Sumatra Island at 21.14 percent, Kalimantan Island at 7.95 percent, and Sulawesi Island at 6.43 percent.

The remaining 5.33 percent were contributed by other islands including Bali and Nusa Tenggara and Maluku and Papua at 3.06 percent and 2.27 percent respectively.

“Meanwhile, Sulawesi Island with a contribution of 6.43 percent has the highest growth rate,” he added. (Humas BPS/ES)