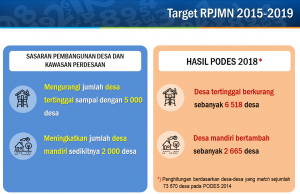 The number of Underdeveloped Villages, Independent Villages, and Developing Villages in 2018 shows various trends, based on Village Potential Statistics (Podes) collected by the Central Statistics Agency (BPS) in May 2018.

The statistics show that Indonesias development has exceeded targets set in the 2015-2019 National Medium-Term Development Plan (RPJMN), particularly in developing villages and rural areas, Suhariyanto said in his statement at the BPS Headquarter, Jakarta, on Friday (14/12).

The other indicator is based on village governance, which include: 1. Having village autonomy (village revenue increased by more than 54 percent); 2. Having a complete set of village apparatus (villages with village secretary increased by 13 percent); and 3. Human resource quality of village head (village heads who are at least high school graduates increased by 10 percent). The number of village/district has also increased by 1,741 compared to that in 2014, the Head of BPS Suhariyanto added. (Humas BPS/ES)