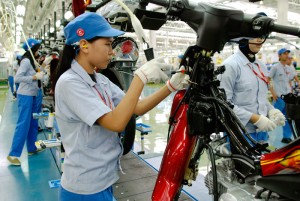 As for the Unemployment Rate (TPT), according Suryamin, in February 2015 recorded at 5.81 percent, or decreased compared to TPT in August 2014 which reached 5.94 percent, and increased when compared TPT in February 2014 that amounted to 5.70 percent.

By level of education, Suryamin convey, in February 2015, the working population is still dominated by those who are educated elementary school (SD) downward, amounting to 45.19 percent. While the population of working with undergraduate education and upward only amounted to 8.29 percent.

According to Suryamin, in terms of production, the highest growth achieved by the Business Sector Information and Communications by 10.53 percent. In terms of expenditure by component Household Consumption Expenditure which grew 5.01 percent.

Suryamin also said that Indonesia’s economic structure spatially the first quarter of 2015 was dominated by a group of provinces in Java and Sumatra. She said the group of provinces in Java Island gives the largest contribution to GDP, which amounted to 58.30 percent, followed by Sumatra Island by 22.56 percent, 8.26 percent and the island of Borneo.

Overall, further Suryamin, the Indonesian economy is measured by the amount of the Gross Domestic Product (GDP) at current prices the first quarter – 2015 to reach USD 2724.7 billion, and at constant prices of 2010 reached Rp 2157.5 trillion. (Humas BPS/ES)