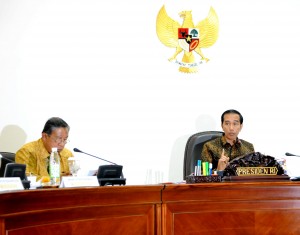 The breakthrough to solve the investment issues will continue, President Widodo said on his facebook fanpage on Tuesday (29/9).

The President also said many times that actually many investors wanted to invest in Indonesia but the investment regulation in Indonesia made them leave the country.

Just imagine. An investor is required to meet 10 procedures which take 52.5 days to start running their  business while in Singapore, they only have to meet 3 procedures within 2.5 days, President Widodo said.

The investment licensing process in industrial area is cut from 8 days to 3 hours, President Joko Widodo said in his twitter account @jokowi posted on Tuesday (29/9) evening.

It is expected that the new policy package will be easy to implement, understood by the public and more effective and efficient.

In the existing regulation for the investment outside industrial area, Darmin added, it takes 8 days for obtaining a business entities license and 526 days for having 11 licenses to do construction, etc.

Through the amendment of the September Phase II regulation, the business entities license and the other 11 licenses for the investment in industrial area are not treated as a license anymore but only as a standard or a requirement, Darmin said.

The license applicant is given quality standards. He/she should meet that standard. Then, the applicant puts a signature as his/her commitment to the standard, he noted.

Therefore, after a number of licenses are changed into a standard or a requirement, the Minister added, the duration to obtain an investment permit in the industrial area would be faster, which is only 3 hours. After that, he/she can start working.

This means that the Investment Coordinating Board (BKPM) should hire its own notary because it will take a long time if the investors have to go to another notary. So, if BKPM appoints an in-house notary or make a contract with a notary, everything can be processed immediately as long as the investor comes and meets the notary, Darmin explained.

In forestry sector, Ministry of Environment and Forestry has cut the investment licensing process significantly. The process is cut from 2-4 years to 12-15 days.

Related to the requirement about a regional recommendation from the Governor, the Minister explained that according to the Laws, currently the forest license is given to the Governor.

So, we give the Governor a deadline no later than 4 days. If the Governor does not give the recommendation, we will manage it, she stated.

Therefore, licensing process to use forest area can be shortened into 12 days or no later that 12-15 day, Siti added. (ES) (JS/EP/YM-Naster/Sy)