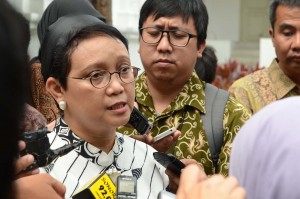 The result of the British referendum that resulted in the UK leaving European Union (EU) is believed will not affect bilateral relations between Indonesia and the United Kingdom, according to Indonesian Minister of Foreign Affairs Retno Marsudi in a written statement in Jakarta on Friday (24/6).

Retno considered the result of the referendum on Thursday (23/6) is the reflection of the will of the majority of the UK citizens and is bound to create a new economic and political order in the UK and Europe.

Nevertheless, the direct impacts of the result of the referendum will be evident in at least the next two years, the Minister said.

The results from the referendum would not take effect immediately because article 50 of the EU Treaty must be initiated before negotiations between Britain and the EU would take place to settle on a withdrawal agreement, Retno said.

According to Retno, relations between the UK and the EU in the future will be determined and regulated by the Withdrawal Agreement.

Issues such as tariff trade, freedom of movement of people, financial regulations, and the UK legal status in a number of the EU international agreements with other countries will be determined in the Withdrawal Agreement, Retno added.

In the political realm, Retno said direct impacts of the referendum for Indonesia will be very limited.

Indonesia believes that the [British] referendum result will not impinge on Indonesia-the UK bilateral relations as it remains in the interest of both countries to continue building cooperation in various strategic sectors,Retno said.

In the meantime, Retno further said that the economic impacts of the referendum still has to be monitored based on the Withdrawal Agreement between the UK and the EU.

The referendums impacts to various existing agreements between Indonesia and the EU or with the UK such as Indonesia-the EU CEPA and FLEGT License will be seen after the Withdrawal Agreement between the UK and the EU is agreed on, Retno said.

The United Kingdom has been Indonesias strategic partner since 2012. Trade value between both countries reached US$2.35 billion in 2015, while investment from Britain in Indonesia reached US$503.2 million in the same year. Data from Ministry of Foreign Affairs also shows that as many as 269,798 tourists from the United Kingdom visited Indonesia in 2015. (Ditinfomed Kemlu/ES)(EP/YM/Naster)