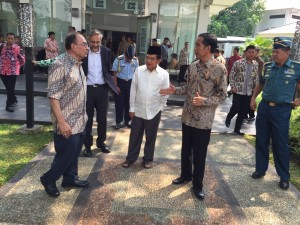 However, Moazzam told to reporters that the British Government chose him to work in Indonesia is not due solely background of Pakistan descent and Muslims. Rather than, the experience to represent the UK in various parts of the world that into consideration his assignment to Indonesia.

“The British government assesses that I can fulfill the task of improving relations with Indonesia, and I have a lot of experience working in South Asia, Middle East, and Africa,” Moazzam Malik said before meeting with President Jokowi, at Merdeka Palace in Jakarta, shortly before performing Friday prayers at the Baiturrahim mosque.

Before being assigned in Indonesia, Moazzam served as Director General at the Department for International Development of British. At that time, he was in charge of overseeing British cooperation in the Middle East, West Asia, and leading British relations with the various multilateral organizations.

Previously President Jokowi and Moazzam have a closed meeting at the Presidential Palace. The meeting was held from 11:00 am until 11:50 pm.

Minister of Foreign Affairs Retno LP Marsoedi revealed that the meeting between Jokowi and Moazzam, to discuss the planned visit of the British Prime Minister David Cameron to Indonesia. “According to the plan, the end of July, British PM will come to Indonesia,” Retno said.

According to Retno, the British Ambassador met Jokowi to discuss cooperation could be done by the time Prime Minister David comes to Indonesia. “To strengthen the relationship between Indonesia and the UK, focused on economic investment,” he said.

While Ammbassador Moazzam Malik argues, the meeting with President Jokowi also to discuss the improvement of bilateral relations between Indonesia and the UK, particularly in the fields of education, business, economic, and investment.  (WID/ES)