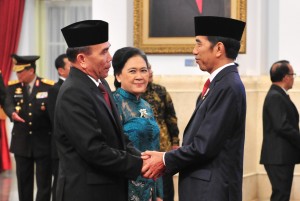 Lieutenant General (ret) Hinsa Siburian, the newly appointed Head of the National Cyber and Encryption Agency (BSSN) has said that he is committed to improving the Agencys programs.

“I thank God for this mandate. I also respect him (the President), for his judgment. I must maintain the trust he gave me as well as possible, with all my might,” Hinsa told reporters after his inauguration at the State Palace, Tuesday (21/5).

Hinsa admitted that there was no specific message given to him by the President. Hopefully, he will give me directives soon,” Hinsa said, adding that he will thoroughly study the programs that had been carried out by the former Head of BSSN as well as continue the good running programs and accelerate some programs.

The Head of the BSSN also stated that the Agency has developed strategies to tackle the influx of fake news or hoaxes through social media, as well as to improve cooperation with other agencies.

Regarding his position as Commissioner of PT Freeport, Hinsa said that he will obey the laws and regulations on the matter. (MAY/Jay/ES)