Build the Power Plant of 35 Thousands MW, President: Do not Relies on Coal 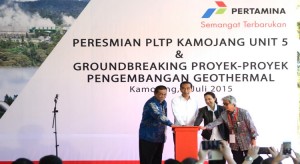 President Jokowi accompanied by Coordinating Minister for Maritime, Minister of SOEs, and Managing Director of Pertamina inaugurated the operation of PLTP Kamojang V, in Bandung Regency, West Java, on Sunday (5/7).

President Joko Widodo (Jokowi) called for the use of coal in realizing the development plan of power plants of 35 thousand Mega Watts (MW) within a period of 5 (five) years into the future should begin to be shifted, changed.

“We have the geothermal power of 28 thousand, there will be many thousands of wind, wave, solar, biomass,” said President Jokowi, while inaugurating Geothermal Power Plant (PLTP) Kamojang Unit 5, as well as Groundbreaking Projects Geothermal Development, in Bandung regency, West Java, on Sunday (5/7) morning.

President even ordered the Coordinating Minister for maritime, Minister of SOEs, and Minister of Energy and Mineral Resources, in order that in future the environmentally friendly power plants, given more priority, because we have the power and potential.

Although the cost may be much more expensive, according to the President, there is no problem. He said, the government should provide special incentives for environmentally friendly power plants.

Even, the President argued that the rate is a little higher is okay. Therefore, people flocked to get into this investment.

“Do not be equated with coal. We’ve got the strength and potential, so if we all concentrate on coal, when exhausted we are not ready with geothermal, wind, wave, solar, biomass, we will be confused later,” President Jokowi said.

Not the Target but Needs

On that occasion, the President Jokowi expressed that in each of his arrival in the province, county, city, always the same complaint. Power outage of 8 hours, 12 hours, half a day, four hours, three times a day. Always as it.

Therefore, he added, the government targeted the Development of 35 thousand MW power plants. President emphasized that the figure was not merely a target, but the need that we must pursue.

The Head of State then pointed to the example plant in Batang, Central Java. He mentioned, has been completed by the end of June.

Previously Managing Director of Pertaminan Dwi Soetjipto reported, Kamojang PLTP Unit 5 is the project and construction of geothermal power plants supply steam for 1 × 35 MW, located in Bandung, West Java. The project is adding generating capacity of Kamojang Area to 235 MW, so as to meet the electricity needs of approximately 470 thousand households through transmission of power plants Java Madura Bali.

Development of geothermal, Managing Director of Pertamina said, is not easy and proven although Indonesia has the greatest potential in the world with 28 thousand MW, only about 5 percent were utilized.

“The entire project has a total generating capacity of 505 MW and a total investment of around 2.5 billion US dollars, which will begin commercial operation in stages from 2015 to 2019,” Dwi said while hoping, with the completion of the project, in the next five years, Pertamina will have a capacity of 907 MW.

Accompanying President Jokowi in the inauguration of the operation of PLTP, among others the Coordinating Minister for maritime Indroyono Susilo, Minister of SOEs Rini Soemarno, Ministry of Trade Rahmat Gobel, the Special Staff of the President Teten Masduki, and Vice Governor of West Java Dedy Mizwar. . (DND/SM/DNS/ES)