Bureaucray Should be More Result-Oriented 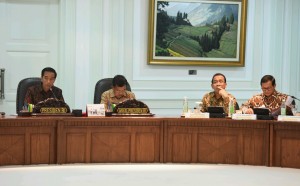 After leading a Limited Meeting on State-Owned Enterprises on 29 February at Presidential Office, Jakarta, President Joko Widodo then discussed the construction of facilities at ministries and institutions. Starting his introductory remarks, the President reminded that in a Cabinet Meeting in December 2014, he had mentioned about moratorium of ministries/institutions buildings.

The purpose of this policy is to focus the priority of the State Budget. The State Budget should be used for infrastructure development such as roads, dams, irrigations, railways, seaports, etc, because it directly impacts the community, the President said.

After applying this policy for one year, the President has received several proposals to construct the facilities of ministries/institutions. This afternoon, I would like to make a decision on this issue and I invite Minister of Finance to deliver it, the President said.