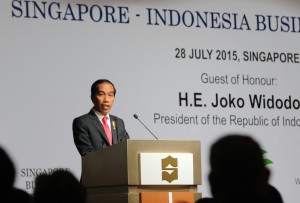 After leading the bilateral talks, which ended with a joint press statement with Prime Minister (PM) of Singapore, Lee Hsien Liong, President Joko Widodo (Jokowi) dialogue with about 350 CEOs of leading companies in Singapore in the Indonesia-Singapore Business Dialogue, which held at the Hotel Shangri La , Singapore, Tuesday (28/7).

On that occasion the President Jokowi conveys the steps of his administration has done. “We are investing in education, we invest in health care, and we are building the infrastructure,” he explained.

In terms of infrastructure, Indonesia has conducted large-scale development in the port of Kuala Tanjung, North Sumatra, which is combined with an integrated industrial zone. In addition, the government is also building another port in Makassar, expanding the capacity of Tanjung Priok, Jakarta, and in September will be built the port in Sorong, West Papua.

On the issue of electricity, the President Jokowi conveys that the Indonesian government has built a power plant in Central Java and Batam. “billion dollars power plant project in Batang (Central Java) is designed to be the largest power plant in Southeast Asia,” said Jokowi.

According to the President, he has delivered his economic policy that government cannot delay anymore to make fundamental changes in the economy.

President claimed to get a lot of appreciation for the economic policy, although in the early stages there will be a feel ‘offended’ by the change.

President Jokowi believe, with the obligation of formal education for 12 years, three years more than today, the future there will be a lot of nurses, engineers, workers, sailors, bankers, and insurance salesman of Indonesia.

“Everyone will have a smartphone, imagine that means 200 million smartphones. Everyone will be connected to the network that will be very good in the whole country,” Jokowi said.

Therefore, President Jokowi asserted, now is the best time to invest in Indonesia. “We only have to look at the history to prove that those who have the courage, those who arrive early will be the ones who have benefited,” Jokowi said.

Be recognized by President Jokowi, there are much work remains to be done by Indonesia, such as the issue of business rules should be simplified. However, Jokowi asserted that the government would continue to fight against corruption, and continue to the bureaucracy reform.