By Fixing the Soft Infrastructure in Port Sector, Indonesia Would Save Rp 700 Trillion 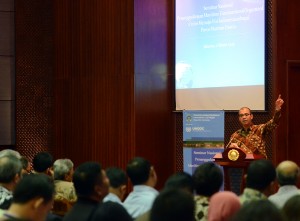 Cabinet Secretary Andi Widjajanto as a keynote speaker at the Maritime Seminar, at the Ministry of Foreign Affairs, Jakarta, Monday (2/3)

Cabinet Secretariat, Andi Widjajanto said that without need to build a new port, and only by improving the soft infrastructure, regulations, and the trade system, Indonesia has potential to save Rp. 700 Trillion, and increase from 0.6 to 0.7 percent of economic growth.

Savings of up to Rp. 700 Trillion, Andi said, could be achieved by integrating between custom and quarantine at the port.

“No need to build a new dock, new ships, and new cranes installed in the port. However, what need to be modified only its soft infrastructure, regulation, and trade system,” Andi Widjajanto said, when became the keynote speaker at the National Seminar on Countermeasures Maritime Transnational Organized Crime, towards  Indonesia Vision as World Maritime Shaft at the Ministry of Foreign Affairs, Jakarta, Monday (2/3).

The infrastructure improvements, according to Andi Widjajanto, is the third component of the maritime connectivity.

The maritime connectivity, Andi said, in addition to pressing efficiency, but also it is believed will help Indonesia to prevent transnational crime at sea.

“Because if the standard is different, then the manifests of the security clearance also vary across in one port to another port, then you will see the holes that will be used by organized crime. This is one of the functions,” he said.

Cabinet Secretary, Andi Widjajanto points out, there are three major perspectives to develop the maritime shaft. The first, that the foreign policy of a country should be relevant to the basic character of the geography of the country.

Second, that what would be the source of power in the 21st century, that wants championed by Indonesia in the future that the source of power to forward instead of military, economic, but it is something that each time we do every day is connectivity.

“The third, which is related to the concept/idea classical received by all students of the school when it was called that Indonesia is in a strategic area, located between two continents and two oceans,” Andi said.

Related to the above, Cabinet Secretary explained, at the time attending the East Asia Summit in Beijing, President Jokowi launched the concept of a more profound. The President said that there are five components of the maritime shaft, namely: maritime culture, economic maritime, maritime connectivity, maritime defense and maritime diplomacy.

According to the Cabinet Secretary, maritime connectivity is the key because it is the only one for Indonesia now to decrease significantly, the price of the logistics is not develops of air transportation, not develops land transportation, such as toll roads or railways, but the key is the sea.