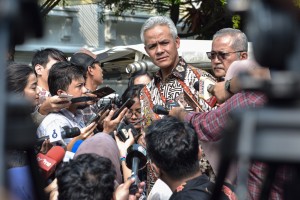 Central Java has asked for assistance from the Central Government to develop three industries in the province namely food and beverage, textile and its products, and furniture industries.

We look forward to transforming Central Java into the hub of Indonesias furniture industry. The President has agreed to the idea and we will push for it, Central Java Ganjar Pranowo told reporters after attending a limited meeting at the Bogor Presidential Palace, West Java, Tuesday (9/7).

Ganjar also applauded the Central Governments plan to boost economic growth in the province  the third most populous country in Indonesia – and expressed his readiness to support the plan.

The Governor went on to say that there are many types of supports that the Central Government can provide including in terms of spatial planning aspects and investment incentives. After considering environmental factors and administrative aspects, we will begin working on it (spatial planning), he said.

Regarding investment incentives, he said that Head of the Investment Coordinating Board (BKPM) has stated that incentive must be provided to investors in Central Java since the province is in competition with Vietnam.

Central Java, Ganjar added, is very attractive for investors, including those from South Korea. Several South Korean investors have stated their intentions to invest in the province because it fits their work culture, he said.

They (South Korean investors) consider Central Java is very attractive for investment. Therefore, we have to provide investment incentives, Ganjar said, adding that those investors want to invest in many sectors, including footwear and electronics.

We will provide areas and permits, so we will be ready to welcome investors, Ganjar said. (GUN/AGG/ES)