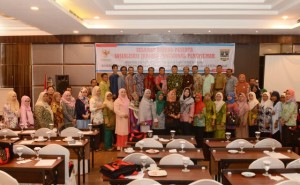 Participants of Dissemination on Functional Position of Translators (JFP) pose for a group photo at HW Hotel, Padang, West Sumatra, on Thursday (27/4)

Assistant to the Deputy Cabinet Secretary for State Documents and Translation of Cabinet Secretariat in collaboration with West Sumatra Provincial Employment Agency (BKD) on Thursday (27/4) at HW Hotel, Padang, West Sumatra, held a Dissemination on Functional Position of Translators (JFP).

The first Dissemination on Functional Position of Translators (JFP) in 2017 was held in Padang because West Sumatra Province has great potentials on agricultural, trade, service, and tourism sectors.

There are many historical sites and beautiful tourist destinations in this Province, such as Gadang Clock Tower, Lobang Jepang (Japanese Caves), Istano (Palace) Basa Pagaruyung, Malin Kundang Stone, and Adityawarman Museum, Assistant to the Deputy Cabinet Secretary for State Documents and Translation Eko Harnowo said in his remarks.

In the meantime, as the Fostering Institution of the JFP, Cabinet Secretariat is committed to continuing to improve the quality and quantity of the translators.  Cabinet Secretariat is now fostering 162 JFPs in 47 central and regional government institutions, spreading across 22 provinces, Eko said, adding that the translators not only master foreign languages such as Arabic, English, German, Chinese, and France, but also local language, such as Buginese.

Eko further said that some of the translators also participated to succeed the Governments programs in 2017, in which 35 translators from all over Indonesia took part in an effort to improve Indonesias ranking in Ease of Doing Business (EoDB) by translating laws and regulations on investment and EoDB.

On that occasion, Eko also said that the translators can be appointed through first appointment, displacement, and inpassing. He added that the Government, through Regulation of Minister of State Apparatus Empowerment and Bureaucratic Reform Number 26 of 2016 on the Appointment of Civil Servant for Functional Position through Inpassing, has extended the validity of national inpassing until December 2018. (DND/GUN/ES) (RA/EP/YM/Naster)