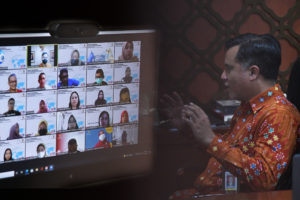 Deputy Cabinet Secretary for Cabinet Work Support Thanon Aria Dewangga as a keynote speaker at the opening of the 2022 Functional Translator Education and Training Program, Tuesday (02/15). (Photo by: PR/Rahmat)

“Every translator is required to attend functional translator education and training program which will be followed by various technical education and training programs compatible with the needs of each agency to improve the competence of translators to support their activities listed in the Regulation of Minister of Administrative and Bureaucratic Reforms on the functional position of translators,” Deputy Cabinet Secretary for Administrative Affairs Farid Utomo said in his written remarks delivered by Head of Pusbinter Sri Wahyu Utami at the opening of the program, Tuesday (02/15).

Cabinet Secretariat as the fostering agency of government translators and interpreters held this education and training program for translators who have just assumed positions as translators, be it through first appointment, leveling, or inpassing.

“Currently, in order to improve the competence of functional translator officers, we are focusing on technical education and training programs compatible with the competencies required by translators in the duties and functions of their respective agencies,” he said, expressing hope that the education and training program will boost the competence of the translator officers to produce accurate and acceptable translations which can contribute to the success of government programs through translation works for promotions of the nation’s potentials, mutually beneficial cooperation with foreign partners, and dissemination of various regulations that must be understood by foreign investors.

In order to achieve them, Farid stated that the education and training shall be adapted from the translator’s job description such as oral translation, written translation, drafting of translation materials, transliteration of ancient manuscripts or archives and inscriptions, and others.

He said that to translate is not merely translating the source language. Translation knowledge is also necessary, he added.

Translation, according to him, requires complex skills, including mastering linguistic and extralinguistic aspects. He said that translation will not develop without knowledge, practice, and experience that go hand in hand.

“Cabinet Secretariat as the fostering agency for functional translator officers is committed to continuously provide comprehensive guidance to translators, be it through various technical education and training, including technical training in journalism, interpreting, scientific works, or by sending them to international events in order to gain experience as a translator and interpreter,” he said.

On the occasion, Farid also revealed that at the beginning of the year, several translators have joined in the preparation of the international event Global Platform for Disaster Risk Reduction (GPDRR), which will be held in May in Bali. He also encouraged government translators to participate in the G20 Summit in October in Bali.

“First, translators currently have a very strategic role and second, it is important that we have a roadmap that aims at producing the best translators, supported by existing institutions,” Thanon said.

Thanon further elaborated on a number of strategic opportunities that translators have. First, translating into a foreign language. Second, translators can contribute to national and international events. “Last year, there was the Dubai Expo. This year, there is the GPDRR which will be prepared by those from BNPB (National Agency for Disaster Management). In the future, we will host the G20. This is where I believe the role of government translators will be really needed,” he said.

Third, translators can play a role in multitrack diplomacy, namely as support for written and oral communications of ministries/institutions leaders to their counterparts in other countries. He stated that state/government officials are obligated to use the Indonesian language at an international event. Thus, the role of translators is vital.

Finally, translators can take part in preserving the local language and culture. “I cannot imagine, for example, my grandchildren or my great-grandchildren, our great-grandchildren not knowing the historical remains of ancient texts of our country. We are recognized by UNESCO as a country with a lot of historical heritage, this should not happen,” he added.

He also said that the role of translators is also needed in providing assistance to foreign tourists who want to see cultural sites.

For the record, the education and training program is participated by functional translator officers from various central and regional agencies. (TGH/UN) (FI/LW)