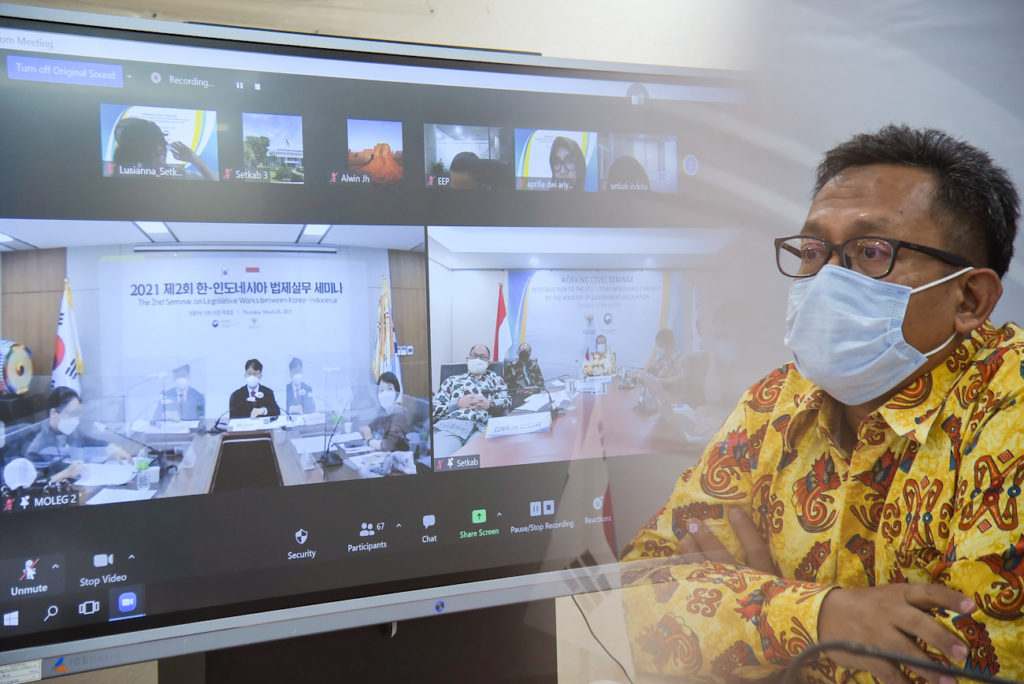 Cabinet Secretariat of the Republic of Indonesia and Ministry of Government Legislation (MOLEG) of the Republic of Korea on Thursday (25/3) held a Working-level Seminar adopting a theme “Introduction to the Statutory Improvement Project of the MOLEG”.

The seminar, which was held virtually, was the second event out of a total of six events planned to be organized by the two countries. Previously, a working-level seminar adopting a theme “Legal System and Legislative Process” was held last month.

Assistant to the Deputy Cabinet Secretary for Legal, Human Rights, and State Apparatus Purnomo Sucipto as the discussion moderator said that this seminar is an implementation of Memorandum of Understanding between the two countries.

He added that the seminar discussed the improvement of laws and regulations in South Korea which is completely different than that of Indonesia. Unlike the Indonesian House of Representatives, the National Assembly of the Republic of Korea does not have a legislation body which has specific function to amend and improve the laws and regulations. The function is exercised by the MOLEG instead.

In the meantime, Director of Legislation Innovation Division of MOLEG, Kwon Junyul, said that the Republic of Korea on 23 March 2021 has enacted Law on General Administration that regulates basic principles of administrative law. The Law which serves as a basis of administrative law mentioned standards of the government legislative activities.

There are three basic principles. First, legislative activities must be accountable through the input from the public, related parties, and consultation with related organizations.

In addition, he said, the country applies principles of proportionality, equality, protection of trust (prohibition on retrospective laws), due process of law, and clarity in evaluating laws and regulations. The principles become the standards of statutory improvement in the Republic of Korea.

Director of Legislation Exchange and Cooperation Division of MOLEG, Kim Namyeon, said that this seminar has proved a strong ties between Indonesia and South Korea.

“I am noticing our strong cooperation ties from your questions, input, and opinions. In fact, we are learning much about Indonesia from this session,” he concluded. (DND/ OFFICE OF THE DEPUTY CABINET SECRETARY FOR POLITICAL, LEGAL, AND SECURITY AFFAIRS/UN) (RAS/MMB)