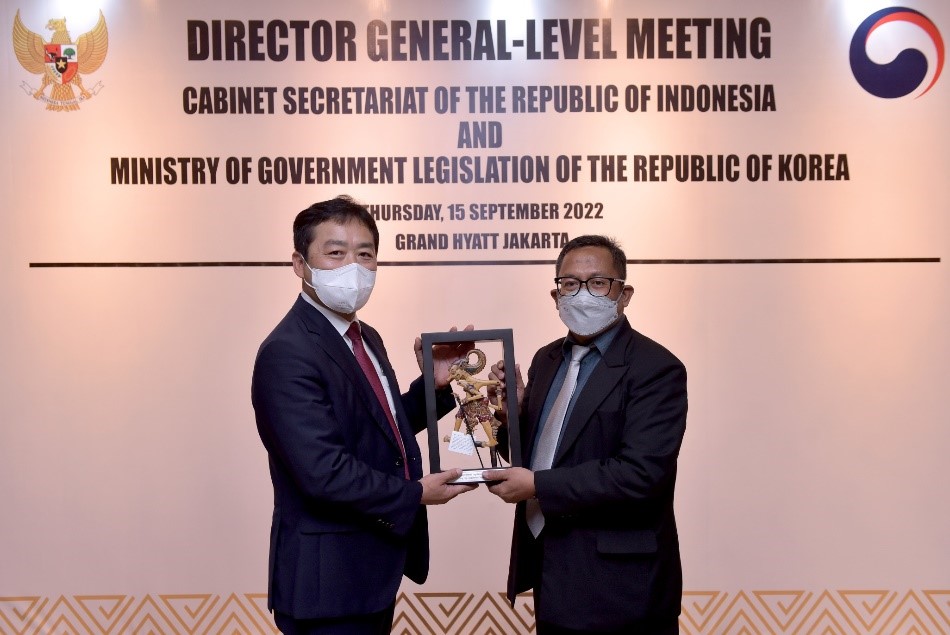 Deputy to Cabinet Secretary for Political, Legal, and Security Affairs Purnomo Sucipto receives a visit from Director General of Ministry of Government Legislation (MOLEG) of the Republic of Korea Choe Young-chan and his delegation at the Grand Hyatt Hotel, Jakarta, Thursday (09/15). (Photo by: PR/Agung)

Deputy to Cabinet Secretary for Political, Legal, and Security Affairs Purnomo Sucipto received a visit from Director General of Ministry of Government Legislation (MOLEG) of the Republic of Korea Choe Young-chan and his delegation at the Grand Hyatt Hotel, Jakarta, Thursday (09/15). This visit aims to discuss the continuation of cooperation between the two institutions.

“It’s a pleasant morning to be able to meet in person for the first time with the new Director General of MOLEG. We are elated and would like to congratulate Mr. Choe Young-chan on his new position. I hope Mr. Choe Young-chan is always healthy, happy, and trustworthy in carrying out his duties and responsibilities,” Purnomo said.

He underscored that this meeting was a manifestation of the commitment of both parties to improve the partnership between the two countries, especially in the field of legislation. In addition, the meeting was also held to discuss several topics of cooperation that will be carried out by both institutions in the future.

“We hope that this two-hour meeting can run smoothly and effectively to produce points of understanding in the implementation of cooperative programs and activities that will benefit both parties,” he said.

During the meeting, both parties agreed to continue cooperation by forming an Action Plan for 2022-2024. In the action plan, both institutions will hold several activities, including the Asian Legislative Experts Symposium (ALES) on September 29, 2022, Seminar of Legislative Cooperation on November 2, 2022, and the KOICA Official Development Assistance (ODA) Project in 2023-2024.

Purnomo stated that it is necessary to establish a specific forum to discuss laws and regulations. It is expected that the ALES, which will be held in South Korea, will fulfill the need, he added.

“We will gladly participate in any forum initiated by Korea because we feel that Korean history, Korean geography, Korean culture, are almost the same as ours. So we want us together, Korea and Indonesia to become advanced societies, advanced countries for a better world,” he said.

The Deputy also expressed hope that the cooperation that has been agreed upon by the two parties can have a broad impact on the Governments and societies in both countries.

Meanwhile, Choe Young-chan said that communication, which has been well established between the two institutions, has been hampered by the COVID-19 pandemic. Nevertheless, the strategic partnership and friendship between Indonesia and South Korea have been strengthened by the visit of President Joko “Jokowi” Widodo to Korea last July.

He also invited Cabinet Secretariat, as the representative of the Government of the Republic of Indonesia, to support and participate in various events to be held in South Korea. (TGH/AIT/ST) (FI/MUR)