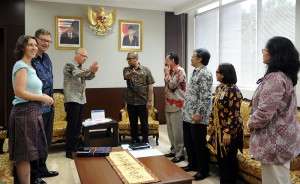 The meeting is to discuss bilateral cooperation between the two countries. Cooperation in education and infrastructure. They have funding agency GIZ that has been working years in Indonesia, as well as their foundations.

Previously, on September 16th of 2014, Georg Witschel meets President Joko Jokowi Widodo. According to Georg Witschel, he came to discuss any possibilities in improving bilateral cooperation between both countries.

During the meeting, Georg and Jokowi discuss about investment, cooperation in education, high technology industry, and maritime. Particularly in  the case of new fleet procurement, knowledge transfer in technology to Indonesia so that new generations of experts begin to emerge in Indonesia, says the Ambassador.

About the meeting with Seskab, Georg explains that they talk about further cooperation in defense and security, also brainstorm on global politics issues such as conflicts in Middle East and Ukraine. That was broad and very good discussion. I am grateful of this opportunity, says Georg.(WID/Humas Setkab/ES)(Ifp)