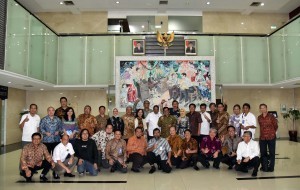 Cabinet Secretary Pramono Anung said that Indonesia’s macroeconomic performance grew quite well above 5 percent amid a sluggish global economy. Overall, Indonesias Ease of Doing Business in 2014 ranked 140 out of 189 countries, 120 in 2015, 106 in 2016, and now 91.

“Indonesia is considered as a country that really experienced a tremendous leap,” Cabinet Secretary Pramono said when receiving a number of executives and activists of the Association of Bandung Institute of Technology (ITB) Alumni in the meeting room of Cabinet Secretary, on the Second Floor of Building 3 of the Ministry of State Secretariat on Monday (30/10).

Cabinet Secretary Pramono admitted that although the positive sentiment because Indonesia has improved its investment grade and world rating, we face domestic issues, that is, the imminent closure of big retailer such as Debenhams and Matahari.

However, Pramono affirmed that this is not only an issue facing Indonesia alone, but it has become a global issue. Pramono mentioned that there is a change of behavior, system, in which, previously, people went to the mall to purchase shoes or bags but now they just hold their gadgets and ordered the products. This trend, Pramono went on to explain, becomes an issue nowadays and needs to be considered by the Government.

Earlier, Pramono said that the fast-changing world is the subject of talks at various worldwide meetings, such as the G-20, APEC, or ASEAN Meeting. “Talks about Uber, Grab, Gojek, and others have become talks at world-level leaders, and no single country has prepared the rules of the game that can anticipate such changes,” Pramono said.

Until recently at the G-20 summit in Hamburg, Germany, Pramono pointed out that this rapidly changing world problem became a topic of discussion. Although the main theme at the time is climate change, according to Cabinet Secretary, we discussed about the changing world. “People will soon not watch television, and other changes,” Pramono said.

Then this is what is now also our concerns. To that end, Cabinet Secretary Pramono hoped that ITB alumni can participate to educate this issue, especially to the community.

Cabinet Secretary Pramono also mentioned the construction of toll roads, which until the by end of October 2019, will have reached 1,800 km, and now has reached 500 km more, or already twice as many as that of compared with the development in the era of independence. However, toll roads or infrastructure are for the long term, including the Becakayu Toll Road which will soon be operated.

According to Pramono, this issue becomes the Governments homework as we will entere the political year next year. Pramono hopes that this achievement can be maintained by anyone who continues the administration in the future.

Attending the occasion were Minister of Tourism Arif Yahya, Deputy Minister of Energy and Mineral Resources Archandra Tahar, Head of the Food and Drug Supervisory Agency (BPOM) Penny Kusumastuti Lukito, all of whom are alumni of ITB. (FID/JAY/ES) (MUR/YM/Naster).