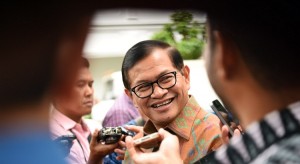 The Government ensures that so far there is no approval for PT Freeport Indonesias Contract of Work (Kontrak Karya). Cabinet Secretary Pramono Anung asserted, the Government will sit together to discuss this contract in 2019, based on the provisions of the Law, that is two years before Freeports contract of work expires in 2021.

So, the speculations are inaccurate. The Minister of Energy and Mineral Resources letter only wanted to inform that ok, we will sit together in 2019, Pramono Anung told the journalists while mentioning that the Law regulates the negotiation will be carried out two years before the contract expires.

It means the Government does not give any guarantee yet? Yes, the Government wants to sit with Freeport to discuss four points that become the Governments standing position. If it is possible, then we will negotiate, Pramono said to the journalists after the Handover of 2016 DIPA (Budget Implementation Entry List), at the State Palace, Jakarta, on Monday (14/12) afternoon.

The four points are: first, Freeport must be able to give benefits for Papua and West Papua. Moreover, this company must give contribution to the development of mining industry in Indonesia; second, Freeport must increase local content, both in terms of goods and services; third, Freeport must involve local units and build human resources, including the possibility of stimulating capital market growth; and fourth, Freeport must maintain investment climate in Indonesia, not only for the prospective investors, but also for existing investors in Indonesia.

Concerning the plan of the House of Representatives of the Republic of Indonesia (DPR RI) to use their inquiry rights regarding PT Freeport Indonesia, Pramono Anung asserted that this issue, as well as the Special Committee (Pansus), and DPRs Honorary Council (MKD) issues are the parliaments business.

He affirmed that President Joko Widodo and Vice President Jusuf Kalla, in Freeport context, do not have any burden. The President will be happy to give a statement on it, but it is clear that Freeport problem is not a burden for the President. Thus, if there should be a discussion or an extention, the President will prioritize the nations interest, Pramono said.(MMB/YM/Naster)