Cabinet Secretary: Coordination Between Bappenas and Bappeda Will be Improved 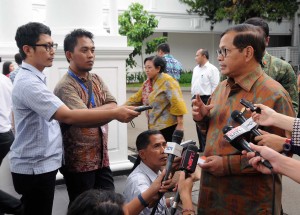 The Government received several inputs after listening to an explanation on economic inequality and budget policy from World Bank Country Director for Indonesia Rodrigo Chaves, at the Presidential Palace, Jakarta, on Monday (14/12).

Cabinet Secretary Pramono Anung said that one of the inputs is the need for synchronization in compiling development plan at national, province and regency levels.

According to Cabinet Secretary, there will be a synchronization in Bappenas. It is because national planing is on Bappenas authority, and there is a judicial review from the Constitutional Court (MK) saying that state-funded projects, locally known as satuan tiga, is no longer exist in the House of Representatives (DPR), that makes satuan tiga placed under the Governments control, which is in Bappenas.

Together with Bappeda at province and regency levels, they will manifest the continuity of the works. Moreover, the Government will allocate as much as Rp 120 trillion with 9 percent of interest rates for Smallholder Business Credit (KUR) program, and they will allocate as well a quite big amount of money for village fund, Pramono explained.

Meanwhile, the Cabinet Secretary added, there are many data that oftenly become a distraction, for example the data regarding the result of poverty survey conducted by Central Statistics Agency (BPS) could be different from the data from other survey institutions. Therefore, data collection will be conducted through one door program, to make the work of the Government in the future easier, Mas Pram, a nickname of Pramono Anung, said.

With this meeting, Cabinet Secretary Pramono Anung hopes the Government, both regional and central governments, the ministers and non-ministerial institutions could find the solution on the problem of poverty which happened in Indonesia.

We hope the solution will touch the people at the lowest level. Thus, it will reduce the inequality between the rich and the poor, Pramono said. (FID/JAY/ES) (RAS/MMB/YM/Naster)