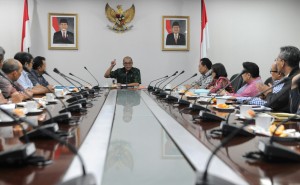 The main job of Cabinet Secretary is e-government. Since we have the small budget, I try to find a breakthrough by creating possibilities that we can grant, Andi said it when he was giving a speech in the handing of DIPA Fiscal (Budget Execution List) and POK (Activity Operational Guidelines) of DIPA in the organization unit of Cabinet Secretariat of 2015 in the Building 3 of Ministry of State Secretariat, Jakarta, on Thursday.

According to Cabinet Secretary, he, Minister of State Secretariat, and Minister of Administrative and Bureaucracy Reform (PAN-RB) have agreed about e-Gov that should be started from the Presidential Palace.

Cabinet Secretary explained that the form of e-Gov will be very applicative and pratice. In instance, in the cabinet meeting, there will not be any hard copy paper anymore, but soft copy. All ministers can access the meeting materials through tablet. President will have the same as well. The speech of president will be showed on tablet, he said.

Cabinet Secretary imagined the future of the Palace as a smart digital office, all will be digital. In the future, there will be a significant change in budget to make our jobs easier, Andi explained.

The Meeting in Hotel

In that opportunity, Cabinet Secretary Andi Wijayanto also talked about the Letter of Administrative and Bureaucracy Reform Minister about the prohibition of a meeting in hotels. He admitted that it could be cheaper to hold a meeting in the hotel than in the office.

If we hold a meeting in the office, there will be a consumption cost with its own catering. While in the hotel, it is a full board meeting already and it is cheaper, so it is fine if we do it in a hotel as long as it is rational, Andy explained.

According to the Cabinet Secretary, the most important thing in planning is we should be able to say and show, for example, the cost of 250 people meeting in the office is IDR 100 million while in the hotel is IDR 70 million. The choice is the hotel, but we have prepared the explanation already, he said.

The Cabinet Secretary asked for a comparative explanation therefore we can report it calmly to the Minister of Administrative and Bureaucracy Reform and responsible it to the public if it is a rational choice. He reminded that now all ministers are monitored by the journalists. Every event in a hotel is directly captured and posted it to the social media to make an impression that the government is not serious to run the instructions of Minister of Administrative and Bureaucracy Reform.

Whereas, Cabinet Secretary Andi Wijayanto continued, if we overlook the Letter, there is a comma which is whenever possible we should do the meeting and technical activities, etc, in the office.

We have to pay attention the exception carefully. So, do not worry to take any decision as long as the reason is efficiency and rationality, Andi uttered.

In that opportunity, the Cabinet Secretary also urged all employees in the Cabinet Secretariat to follow President Jokowi in doing his official trip that chose to use the national airlines. It means we should take Garuda Indonesia and Citilink, find the ticket of both airlines first and it should be in economy class, he urged.

The handing of DIPA and POK DIPA was attended by the officials of echelon I, II, and III in the Cabinet Secretariat. (Humas Setkab/WID/ES)