Cabinet Secretary: Everyone Can Be a Hero 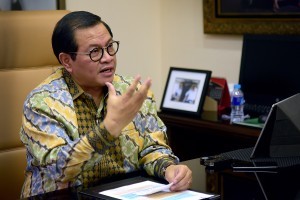 Cabinet Secretary Pramono Anung said the meaning of a hero can change from time to time. He explained that the so-called heroes we have known were our founding fathers, people who participated in the war or people who co-founded this country. Now, however, a hero can have a different meaning.

Someone fights for humanity issues, sports, social issues, health issues, or those who volunteer in natural disasters relief efforts can also be called a hero, said Pramono in an interview on National Heroes Day , taking place at his working office in Building III Ministry of State Secretariat, Jakarta.

Thus, continued the Secretary, the challenge of a hero can be different, depending on context. Most importantly, anyone who wants to be a hero, according to Pramono, must devote his life to the country and must pay great contribution for our nation.

Pramono added that the young generation should be competing to be the best in their fields and gets public recognition as a hero. He once again emphasized that anyone can be a hero as long as he does something useful and valuable for the community.

The Cabinet Secretary also expressed hope that every child in Indonesia has a hero spirit in their mind that can inspire us to give the best for our country and for humanity. (DNA / AGG / ES)