Cabinet Secretary: Everything is Under Control 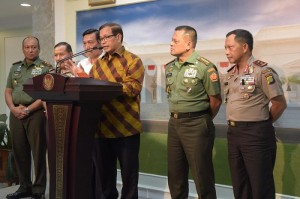 Cabinet Secretary Pramono Anung in his press statement said shortly after receiving reports on a series of bomb and gun attacks, as well as suicide bombing near the Sarinah shopping center on Jalan Thamrin, Central Jakarta, on Thursday (14/1), President Joko Jokowi Widodo cut short his working visit in Majalengka and Cirebon, West Java.

The President has cut short the working visits in order to oversee the location of the incident. He has also received reports on the ground directly from Chief of Jakarta Regional Police (Kapolda), Chief of Indonesian National Police (Kapolri), Commander of the Indonesian National Defense Forces (TNI), the Jakarta Military Commander (Pangdam Jaya), and Coordinating Minister for Political, Legal and Security Affairs, Pramono said in a press conference after a Limited Cabinet Meeting led by President Jokowi at the Presidential Office, Jakarta on Thursday afternoon (14/1).

Pramono added that the Government had managed to contain and control the situation and said that traffic in the area is now re-opened.

Furthermore, Pramono also asked the journalists not to report invalid information. He also confirmed the bomb and gunfire attacks only happened near a Starbucks café in the proximity of the Sarinah shopping center on Jalan Thamrin, Central Jakarta, and at the police post at the intersection of Jalan Thamrin and Jalan K.H. Wahid Hasyim and did not happen elsewhere.

Pramono also said at least seven people were killed in the assaults, including 5 attackers and two civilians (a Canadian national and an Indonesian national).

So there are 7 victims in total, while the number of injured victims has now risen to 20 from the previous 15. Five of them are police officers. They include those who sustain minor injuries and serious injuries, he concluded. (UN/SLN/ES) (EP/YM/Naster)