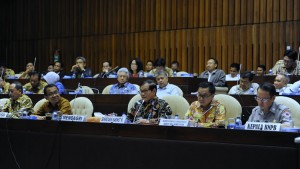 Cabinet Secretary Pramono Anung and Minister of State Secretary Pratikno as well as a number of high-ranking officials attend a joint meeting of the commissions of Indonesian House of Representatives, on Tuesday (13/10).

Cabinet Secretary Pramono Anung affirmed that the Government has taken a number of measures to overcome land and forest fires which cause smog disaster in some Indonesian areas.

In a joint meeting at the House of Representatives of the Republic of Indonesia (DPR RI), on Tuesday (13/10), Cabinet Secretary Pramono Anung who attended the meeting with the Minister of State Secretary Pratikno, with representatives from the Ministry of Environment and Forestry, with representatives from the Ministry of Home Affairs, and with the Head of National Agency for Disaster Management (BNPB) Willem Rampangiley, explained the measures taken by the Government, such as: a. To establish smokes emergency response posts in six provinces (Riau, Jambi, South Sumatera, West Kalimantan, Central Kalimantan, and South Kalimantan), and b. To conduct water management operation.

According to Pramono, the water management operation shall include:

The fire is also extinguished by using two helicopters from Singapore, Pramono said.

At the joint meeting led by Lukan Edy from Partai Kebangkitan Bangsa (the National Awakening Party) Fraction, Pramono Anung also explained that other measures have been taken, such as weather modification as well asto mobilize the forces of TNI/Polri to help to extinguish the fire and to patrol the area.

Pramono Anung also stated that there is a proposal from the Minister of Social Affairs to the Minister of Finance to give cash assistance as life insurance for underprivileged people (the holder of Prosperous Family Card/KKS). The total of the budget is Rp 1.4 trillion.

The calculation of the budget is Rp 10,000/family for 90 days x 1,600,000 families in accordance with Minister of Social Affairs Regulation Number 4 of 2015 on Direct Cash Assistance for Disaster Victims, Pramono said.

Long term handling will be included in the budget to finance this handling, Pramono said. (MMB/YM)/Sy.