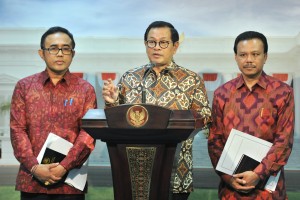 Only four out of 12 cities/regencies designated to develop waste-based power plant (PLTSa) have already run the project.

Hopefully this year the projects can be completed in the four cities, namely Surabaya, Bekasi, Solo and Jakarta, Cabinet Secretary Pramono Anung told reporters after attending a limited meeting on the Development of Waste-Based Power Plant at the Presidential Office, Jakarta, Tuesday (16/7).

Beside those four cities, Bali is also considered ready to implement the project, Pramono added.

However, there are a number of issues that still hamper the development of the PLTSa, among others the ongoing administrative matters and different tariff setting set by state electricity company PLN and with the one set in the regions.

In response to that, President Jokowi has instructed PLN to prioritize development of PLTSa as an effort to reduce waste rather than to gain profit.

Another issue is the difference in waste management fee in every region, while in fact, the fee has stipulated in the Presidential Regulation so every region must abide the law.

Todays limited meeting is expected to solve all these issues, Pramono said.

Pramono maintained that waste management is a very serious issue that needs to be handled immediately; thus, he said, the development of PLTSa is very crucial. He cited an example of Bekasi where garbage volume reaches 1,700 tons per day and Jakarta that produces 8,000 tons garbage per day.

Considering the high volume of garbage produced, President Jokowi has said he will prioritize the development of PLTSa in those five cities, followed by the remaining 7 cities. (FID/JAY/ES)